The major obstacle to Randall’s vision is that Israelis are not going to voluntarily agree to dissolve the Jewish state. In the absence of such an agreement there would be bloodshed.

Incredibly, Randall replied that he rejected the idea that there would be war between the two sides and that he had been advised by Ronnie Kasrils that white South Africans actually felt “liberated” after apartheid ended.

Incidentally, Kasrils once claimed that “South African Jews told their children not to waste time on the blacks.”

“The antagonisms are the product of Zionism. If we got rid of Zionism people can live peacefully together.”

Randall, who described himself as a “socialist”, said it was in the west’s “interests to cosy up to Israel and turn a blind eye when it breaks international law because it sees Israel as an ally near 70% of the world’s oil resources”.

Randall said Faithless joined the boycott because “to play in Israel sends the message that it is acceptable to conduct business in an apartheid state”.

Although, he said, some of the band members weren’t happy about not going to Israel to play.

However, Faithless are now defunct having been active from 1995-2013. Only in 2011 did they actually decide to join in this racist cultural boycott. Ironically, their Wikipedia profile has a photo of them performing in Haifa, Israel in 2005.

Last night Dave Randall was, instead, performing to just 30 people at a SOAS Palestine Society event sponsored by British charity War On Want. It was the book launch of Voices from the Boycott, Divestment and Sanctions Movement. The so-called Palestinian “right of return”, which would lead to the destruction of the Jewish state, is the main racist plank of this Boycott, Divestment and Sanctions movement (BDS).

Also on the panel were the book’s editor Rich Wiles and War On Want’s campaigns officer Rafeef Ziadah. In answer to my question about how many should die Wiles said he didn’t see why anyone would die but that the Palestinians “will never give up the right of return”. As for destroying the Jewish state Wiles continued:

“The idea of having a Jewish democracy is an oxymoron. It’s a case of one group of people privileging their rights over those of others.”

Meanwhile, War On Want’s Rafeef Ziadah claimed that for me to speak in terms of “Israel being destroyed” was racist discourse because it was actually the Palestinians who were suffering an “ongoing destruction”. She said that “the BDS movement will relinquish the racism of the Zionist movement”.

As an aside Ziadah told the audience that I attend all her talks to write about them. She flatters herself but seeing as she obviously reads this blog maybe she could leave a comment letting us know whether she is still a big fan of Islamic Jihad terrorist Khader Adnan who does a nice sideline in inciting Palestinians to become suicide bombers.

But he left out the main reason; those who deliberately single out the Jewish state because it’s, well, Jewish. Wiles mentioned that “650,000 mainly innocent Iraqis had been murdered by American and UK led forces”, but calling for a boycott of the USA and UK did not pass his lips.

Wiles, who said he had lived in “Palestine”, claimed that although it was now “quiet times in Palestine” there was an “ongoing Nakba” including:

1. The planned removal of 70,000 Palestinian citizens of Israel from the Negev so that a forest funded by the JNF can be built instead. Wiles said that to Israelis “the lives of trees are more important than the lives of the Palestinians”.

2. The West Bank Palestinian village of Sosia whose inhabitants were displaced so an “illegal settlement” could be built there instead.

3. Seven Palestinian villages that are waiting to be demolished so Israel can build Firing Zone 918 to practice military manoeuvres.

4. 90,000 Palestinians living in east Jerusalem who are at risk of displacement so Israel can build road links to settlements.

Wiles described all this as a “silent transfer policy which can slip under media attention unlike what the Zionists did between 1947 and 1949”.

At one stage there was a surreal discussion about the size of the anti-Iraq war march through London and the size of the crowds in Tahrir Square. Wiles said that although BDS wasn’t as big they would, instead, be more “strategic”.

Just as well because with only 30 people in the audience Wiles, Ziadah, Randall and War On Want are embarrassing themselves. And now you can understand more fully why even arch-critic of Israel Norman Finkelstein felt compelled to call the BDS lot “a cult of dishonesty” with no other desire than to destroy Israel. 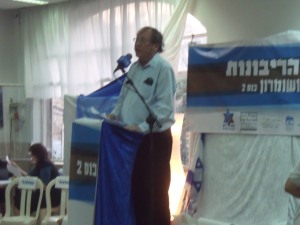 I heard Howard speak at the Application of Israeli Sovereignty over Judea and Samaria conference in Hebron in July 2012. MK Tzipi Hotovely in background. See clip below.

The stone-setting took place of Howard Grief in Jerusalem on 2nd July. I would like to pay tribute to this extraordinary man and the unique legacy he left to the Jewish people in his book The Foundation and Borders of Israel under International Law published in 2008, which was the product of more than 20 years of research.

It is a work of profound scholarship yet the documentation of the Jewish legal rights to the land set in an historical narrative make it a compelling read. Each titled chapter within it is a stand-alone with the first being the most important.

Howard Grief was a Canadian lawyer specialising in commercial law and litigation and whose passion and love for the land of Israel and the Jewish people set him on the path he was to follow.

He made aliya in 1989 with his Israeli wife and two young sons and whilst practising as an attorney in Jerusalem he was appointed legal advisor to Yuval Ne’eman, Minister for Energy and Infrastructure in the Shamir government, on matters pertaining to Israeli territorial sovereign rights. Ne’eman was a distinguished physicist who set up Israel’s space programme and discovered the existence of quarks, independently of Murray Gell-Man, and who won the Nobel Prize for the discovery.

Howard realised that Israeli sovereignty did not originate from the UN Partition plan of 1947, universally believed to be the instrument of international law that created Israel, but instead it was the San Remo Conference of the 24th and 25th April 1920 that invested sovereignty in the Jewish People through the representative Zionist organisations.

It was at San Remo, the continuation of the Paris Peace Conference of 1919, that the Principal Allied Powers, the victors in the war against the Central Powers, set aside all of Palestine as the land designated for the reconstitution of the Jewish National Home based on the historical connection of the Jewish People with Palestine.

The San Remo resolution was described by Lord Curzon, the British foreign minister of 1919, as the Jewish Magna Carta.

The Franco-British Boundary Convention of 23rd December 1920, which fixed the northern and north-eastern boundary of Palestine with Syria-Lebanon, made it clear beyond any doubt that Judea, Samaria and Gaza were to be integral parts of the Jewish National Home. Indeed, the maps of the cartographer and theologian George Adam Smith were to be used as the basis of the future borders based on the ancient kingdoms of Israel and Judah.

Howard conducted his painstaking research from British government archives and the minutes of the San Remo conference, both in English and French, as well as numerous other original documents associated with that era.

His original research established him as the leading world authority on the subject and has been used in an Israeli government video explaining Israel’s rights to the territories.

On a personal note it was my good fortune to have met Howard and to have enjoyed his friendship during the last two years of his life.

In June 2011, whilst in Jerusalem, I phoned him with a view to him giving a lecture in London but he explained that his health would not allow it as he was on dialysis several times a week.

Nevertheless, despite his deteriorating health, he was busier than ever writing articles, giving lectures and responding to requests worldwide for his opinions.

He had presented a petition to the Canadian House of Commons on behalf of Canadian citizens regarding Israeli sovereign rights to the territories and was in the process of doing the same in America to Congress.

He had an ever growing emailing list and it was always a pleasure to read his latest missive addressed to “my dear correspondents”.

He had a marvellous pen that he used to great effect in his put-downs to those so-called legal experts, dilettantes he called them, who admonished Israel for her “illegal” behaviour.

My particular favourite was a letter on behalf of clients regarding demands from the European Former Leaders Group, including Chris Patten and others, to the President of the European Council that denounced Israel for its “illegal” settlement activity, including in East Jerusalem, and demanded that punitive measures be taken against it.

He admonished them for their “impudence” and their “complete and abysmal ignorance of Jewish Legal Rights to the Land of Israel” and then went on to inform them what these were in a concise summary.

In conclusion, Howard was a modest and gentle person who was never interested in his own ego and who spent his most productive years documenting Jewish rights to the Land at his own expense so that future generations would have the knowledge with which to fight the delegitimisation and demonisation of Israel that has now become common currency.

His passing is a great loss to all Am Yisrael. May he rest in peace.

This is cross-posted at CiFWatch and also by Jonathan Hoffman.