The Guardian and Hamas: The love story continues. 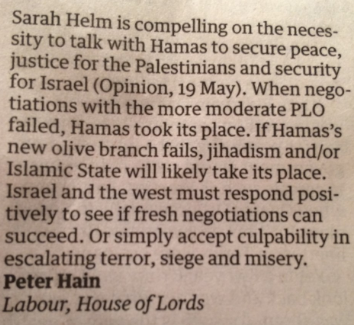 Love is in the air at the Guardian. With summer approaching in the UK, down at Guardian towers (soon to be moving out of London to try to cut their dreadful financial losses) they continue wooing one of the most anti-Jewish outfits since the Nazis: Hamas.

One of the most effective ways to offend Jewish people is to show sympathy to Hamas, an organisation who, by their own admission in their 1988 founding Charter, want to murder every single Jewish person on the planet; man, woman and child.

In a Guardian opinion piece in May 2017 headlined Why now is the time to talk to Hamas Tareq Baconi asked us to do just that.

And now Sarah Helm does similar in friday’s Guardian with a piece headlined If we cared about peace we would be talking to Hamas.

Like Baconi, Helm is in rapture about the Hamas’ recently published Document of General Principles and Policies. Helm falls head over heels in love with Article 20 in which Hamas calls for “a fully sovereign and independent Palestinian state, with Jerusalem as its capital along 1967 lines”.

Helm assumes this shows Hamas’ “commitment to a two-state solution to the Israeli-Palestinian conflict”.

It shows no such commitment. It merely commits to a Palestinian state on the so-called West Bank. Article 20 even expressly states “Hamas rejects any alternative to the full and complete liberation of Palestine, from the river to the sea.” This ultimately means the total removal of the Jewish state. Helm chooses to overlook this.

Baconi did admit that “Hamas’s leaders have denied that this document replaces the movement’s founding charter”. As I have stated that 1988 Charter asks “Moslems fight the Jews (killing the Jews)”.

Helm admits no such thing but maybe “killing the Jews” isn’t such a biggie.

Helm is far more interested in Hamas’ parlous financial situation and Gaza’s lack of electricity. The latter was brought on by Hamas’ dispute with Fatah. Even vicious anti-Israel websites admit this.

The former was brought on by Hamas being more concerned spending its international aid on rockets and tunnels with which to attack Israel’s civilian population than spending it on the population it was elected to govern. And Hamas’ tunnels are built by the children of Gaza, many of whom have died while building them.

And since it was elected Hamas has fought three wars with Israel but has not built one shelter for its own people so leading to many of their deaths while their own cowardly leadership hid in safety under the Shifa hospital.

This is the vileness that Helm thinks can be rationalised with.

Helm even accuses Israel of having built an “apartheid wall” around Gaza. How, in any rational sense, can it be “apartheid” to build a wall that stops Hamas entering nearby Israeli towns like Sderot to murder innocent Jewish Israelis?

The very minimum Helm does is acknowledge that Gaza also has a border with Egypt. But for Helm it’s “Israel’s siege of the territory” that is to blame. She writes that “Two million Gazans, mostly refugees, are today locked behind walls and fences and deprived of bare essentials”.

Bare essentials? Israel’s Coordination of Government Activities in the Territories (COGAT) details the huge amounts Israel supplies to Gaza in terms on food, fuel, healthcare etc. There is no boycott of “bare essentials”.

These sick Guardian pieces by Baconi and Helm won’t have any impact beyond riling and offending the British Jews who read them.

Meanwhile, the Guardian published a letter (see photo above) on Saturday from ex-Labour Minister Peter Hain who refers to Hamas’ recently published document as a “new olive branch”.

If a far-right Nazi group attempted to moderate its stance towards Jews most reasonable people would never take the bait. But when Hamas attempts it the likes of Baconi, Helm and Hain not only take the bait they are also so easily reeled in!

(This is also posted at UKMediaWatch)

3 responses to “The Guardian and Hamas: The love story continues.”