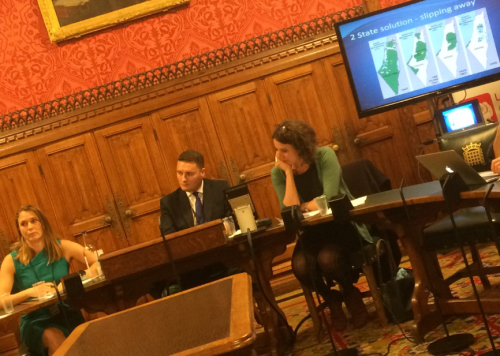 It’s de rigueur at Labour chaired anti-Israel events in Parliament for those making Israel’s case to be branded “disrupters” and threatened with removal. In April Labour MP Mark Hendrick had myself and others removed by armed police after I, literally, asked a question.

Labour MP for Ilford North Wes Streeting threatened to have me removed on Tuesday night from his Gaza on the brink? event in Parliament. My crime: passionately asking why the panel spent their time totally blaming Israel for the plight of Gazans while giving Hamas a free pass.

Admittedly, I had also congratulated the three NGO representatives on Streeting’s panel for all making a great living out a desperate situation. Streeting immediately slammed me for questioning their motives.

But the “Palestine Industry”, so to speak, is the great untold story. Aimee Shalan of Medical Aid for Palestinians, Omar Shakir of Human Rights Watch and Helen Thompson of Care International all came to Parliament and spoke about the same subject. They even repeated exactly the same phrase to describe Gaza’s situation: “De-development”.

They complained how little money Gaza is receiving which, in addition to Israel’s “occupation” of Gaza, is causing this “de-development”. Shakir, Thompson and Shalan are just three of thousands receiving salaries for the same work; money that could be spent on Gazans.

Not that pledged money gets to those Palestinians in need anyway. Hamas siphons off money to build terror tunnels into Israel and the Palestinian Authority financially rewards families of Palestinian terrorists.

Shalan described how critically ill Gazan babies have relatively little medical care from nurses compared to those in the UK, how 10% of Gazan children have stunted growth and how depleted medical supplies are.

Thompson described how the elecricity crisis affects livelihoods and demanded more money from DFID for Gaza.

Shakir claimed “Israel has kept Gaza permanently closed”, that Israel has “total control of Gaza” and, of course, that Gaza is an “open air prison”. The only mention of Hamas in all three talks was when Shakir mentioned its “arbitrary arrests”.

Shakir said “because of the closure responsibility falls fully on Israel” and then demanded the UK government call on Israel to stop the ban on freedom of movement from Gaza.

SNP MP Dr Philippa Whitford also spoke. She questioned why Gaza isn’t in the news and asked if the international community was too busy for Gaza. She said Israel’s ban on “dual use materials” meant Gazans scavenged for steel rods which they straightened out for use in buildings which could lead to such buildings collapsing.

Whitford said the drinking water is undrinkable, that Gaza City stinks of sewage and that there’s no radiotherapy in Gaza and only 45% of Gazans are allowed into Israel for radiotherapy (a statistic vigorously challenged by Jonathan Hoffman).

She said Israeli soldiers patrolling borders saps their potential as they are “bored out of their minds”. She claimed it isn’t a positive experience for Israel and Israelis and then said Israel should build HS2 as it builds “settlements” so quickly.

She finished off by showing the anti-Zionist map beloved of anti-Semites where Israel has taken virtually everything from the Palestinians (see above).

Whitford’s was also a Hamas-free talk and with no mention of the lengths Israel’s COGAT goes to supplying Gaza’s vital needs.

After Jonathan and I had spoken during the Q&A someone called Gary stood and complained about us “invading space and trying to disrupt the meeting.”

Meanwhile, in response to my question about Hamas Shalan simply implied I was uncaring about the plight of Gazans.

Most of the remaining questions weren’t about the humanitarian situation at all. They were about the “one state solution”, the Balfour Declaration and how Israel is cracking down on NGOs like Breaking The Silence. Of course Israel isn’t doing that. Israel merely wants declarations of sources. The equivalent of Breaking the Silence, which seeks the indictment of Israeli soldiers, would never be allowed in the UK.

Streeting then finished his event with the sweeping “I’m worried about democracy in Israel.”

When he got home Streeting tweeted that I “sat there heckling and shouting” and called myself and Jonathan “rude yobs”. However, we were respectful and did absolutely nothing wrong.

Streeting is considered “pro-Israel” by many in the British Jewish community. But on this evidence, and considering the letter he signed slamming Israel “the occupying power in Gaza” and accusing Israel of “collective punishment”,  I have grave doubts about this.