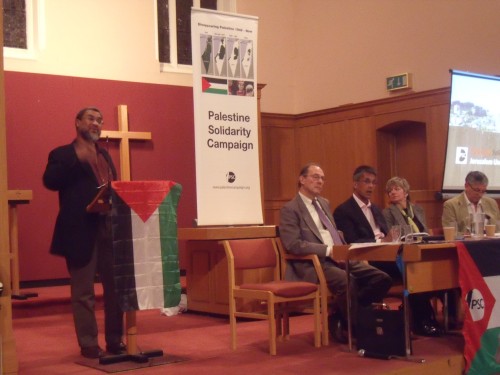 I feel somewhat rejuvinated after a moving and uplifting Yom Kippur sat in synagogue listening to inspirational sermons and prayers and it was good to see many friendly faces (note to self: must go to shul more).

So it is with sadness that I now have to write about yet another sick anti-Israel public meeting in London that took place last Thursday at the Rivercourt Methodist Church, King Street, Hammersmith.

The event was called Jerusalem Under Threat and was held by the West London Palestine Solidarity Campaign. Due to speak were Reverend Stephen Sizer, Arthur Goodman (Jews for Justice for Palestinians), Linda Ramsden (Israeli Committee Against House Demolitions) and Daud Abdullah (Middle East Monitor). Ghada Karmi couldn’t make it but instead we were subjected to a talk by an Anarchist Against the Wall (see clip at end).

After a long journey there I made straight for the toilets. One congregant told me that I should stay in there. Then as I sat down for the talk I was approached by a policeman who warned me not disrupt the meeting.

Up first was Daud Abdullah who spoke about how UN Resolution 181 called for the internationalisation of Jerusalem, while disregarding the fact that 181 doesn’t apply now having been rejected by the Arabs in 1947. He also spoke of Israel digging up 14th Century Muslim cemeteries and burying the remains in “mass graves” to make way for the Museum of Tolerance.

Arthur Goodman gave us a lecture on international law regarding Jerusalem and spoke of a supposed “Masterplan” for Jerusalem which entailed Jews eventually making up 70% of Jerusalem’s population and the Arabs the remaining 30%.

Stephen Sizer was proficient at marketing his book Christian Zionism: Road-map to Armageddon?, there being a leaflet on every seat. He was quick to tell us that Christians have lived in Jerusalem for 2000 years and in peace with their Christian and Jewish neighbours and that only recently have tensions grown. He said that since 1948 there has been a massive reduction of Christians in the West Bank and Israel. Not surprisingly he blamed Israel for this and referred to “the apartheid wall” as “segregation based on race”.

He quoted passages from the bible that he believes supports a “one state solution”, which was all lapped up in silence by his hypocritical audience who would have yelled derision at someone had that person quoted the many biblical passages that support the Jewish people’s right to Israel, the West Bank, Gaza and Jordan.

He said that church leaders refuse to speak out about Israel’s crimes because of “guilt for the Holocaust and fear of anti-Semitism” and that churches which side with “the occupation” and Zionism have “repudiated Jesus, have repudiated the bible and are an abomination” (see clip below).

At the end of the event Jonathan Hoffman persuaded me to stand outside the church with him to hand out pro-Israel leaflets to the congregants as they left the church. It was a futile gesture and all it did was encourage someone who called herself “Jane Green” to tell us that there weren’t any gas chambers in the Holocaust, that the Jews had instead died having had their foreskins chopped off, that only a couple of hundred thousand Jews died in the Holocaust, that the Jews are using the Holocaust to commit genocide against the Palestinians and that all the Jews in Israel are total Nazis, as you can hear here:

With that we trudged off home hungry, cold and dispirited that a British church can hold an event that seemed to engender such disrespect for 6,000,000 souls who died in the most dire of circumstances.

This Anarchist Against the Wall had no answers when challenged mid-flow by Jonathan Hoffman:

The West London PSC Chair says what he thinks about Israel:

Arthur Goodman readying himself to speak. 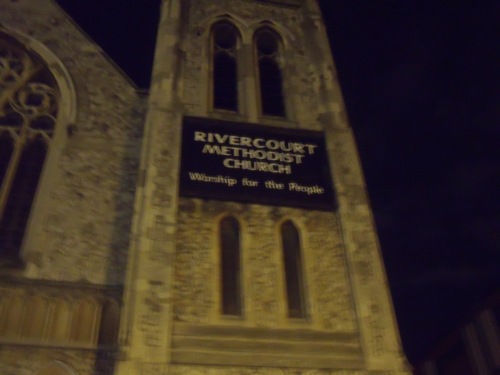 44 responses to “Sizer, the Rivercourt Methodist Church and Holocaust denial.”