Threatened and told I’m “one of the chosen people” at anti-Israel trade union event. 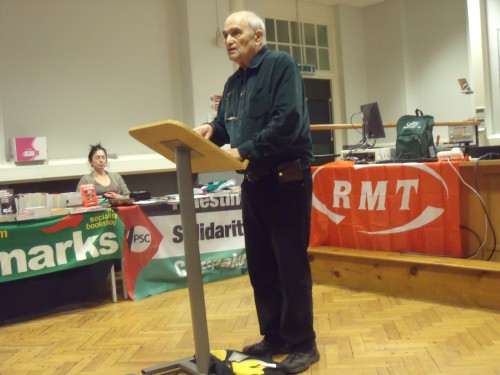 Moshe Machover about to wake someone up with talk of wet dreams.

Last night the RMT union, which represents London Underground’s tube drivers, held a rally at SOAS under the pseudonym Palestine’s Fight for Freedom.

Speakers demonised Israel with accusations of “apartheid”, “ethnic cleansing” and being a “racist state”. There were also the usual racist boycott calls.

There was an incredible screaming rant by Steve Hedley, RMT’s London regional organiser, in which, addressing an audience member, he made remarks such as “your friends in the media”, “the attack on those innocent women and children who you starved and turned into the biggest concentration camp on the earth”, “you’re an absolute disgrace to the Jewish people” and “you’re a modern day Nazi”.

After he had sat down I asked him if he felt better, to which he replied:

“Better than you, obviously. But then again you’re one of the chosen people so you might feel better than me, huh?”

Here is the audio of Hedley’s rant, including his “chosen people” remark. He was cleared earlier this year of assault:

Hedley on “the chosen people”.

And here is some footage of the end of Hedley’s rant:

It wasn’t long after this that I felt a tug on my shirt collar and heard the words “You’ve got a right hook coming to you” menacingly whispered into my ear.

Here is another RMT official speaking about how Israel has “deformed the area”:

Hedley had earlier more calmly refuted any accusations of anti-Semitism:

“If the Israeli people are going to tolerate the oppression of the Palestinian people, they will never be free themselves. And I’m an anti-fascist. I’ve been an anti-fascist since the early teens. I’ve got absolutely nothing against Israelis at all; nothing against Jewish people. It’s a clear line to draw because people have been throwing around labels ‘oh, you’re anti-Semitic’… and that’s not the case.”

Well, that’s all clear and good, apart from calling a Jewish person “one of the chosen people”.

More depressing than that though was to hear a SOAS lecturer, Dr Adam Hanieh, calling for a racist boycott of Israel. Let’s be clear; he was not calling for a boycott of “settlement goods”, but everything Israeli.

I don’t wish to suggest that there is anything improper about Hanieh’s classes. I have never been in one. But do his students know of his vile politics before enrolling on to Development Studies at SOAS?

If you were parting with £9,000 a year wouldn’t you want to be informed that a lecturer supports racist action? I would. Even if he or she were the best lecturer in the world I wouldn’t want to have anything to do with them.

Hanieh’s SOAS biography gives no hint of his boycott activism. Here is Hanieh speaking about a boycott of Israel last night:

And here is Hanieh talking about “ethnic cleansing” and comparing the West Bank to the bantustans in South Africa:

Meanwhile, raunchy Moshe Machover bravely injected some sex talk into the event. Apart from calling for a “one-state solution” he said:

“The wet dream of all major Zionist parties is further ethnic cleansing. And this is what is on the cards.” (At 2 mins 43 secs.)

And here is Hugh Lanning, Chair of the PSC and Deputy General of the Public and Commercial Services Union, complaining about BBC bias and refuting claims that criticism of Israel is anti-Semitic, despite the fact that no one makes such a claim. Calling for the destruction of Israel, which is the PSC position, is anti-Semitic though.

Ilan Pappe’s squirming answer was that Iran is already being sanctioned and, therefore, the RMT doesn’t have to boycott Iran and that everyone knows that the likes of Saudi Arabia are oppressive, unlike the media which presumes that Israel is democratic.

He finished off addressing the difference between the Nazi boycott and today’s boycott movement just by saying:

“How can someone who was the victim of Nazis stand in support of Israel today?”

Pappe is a lecturer at Exeter University.

It was left to Jonathan Hoffman to propose that Israel was a smokescreen for the failure of unions like the RMT to prevent the cuts, which didn’t go down with the Chairman of the event who said that he wouldn’t be taking any lectures on RMT’s efforts to represent the working man.

But is the same union that stops many a working man from getting to work when they launch one of their regular tube strikes?

If so then the sooner Mayor Boris introduces driverless tube trains, the better.