Israel’s supporters out in force in Trafalgar Square.

Israel’s supporters came out in Trafalgar Square today to show sympathy with Israel as rockets continue to rain down from Gaza and to wish a happy 25th birthday to Gilad Schalit who is in his sixth year in isolation in Gaza having been kidnapped by Hamas from Israeli soil when he was 19.

There were some tremendous speeches.

Hasan Afzal, of British Muslims for Israel, said he supports Israel because it is “the only country in the Middle East where Muslims have freedom and democracy”.

Joy Wolfe urged the crowd to ignore media lies about Israel and described Israel as a home for people of all religions.

She went on to call for an end to the double standards of the United Nations and some British MPs and said that Gilad Schalit probably doesn’t even know that today is his birthday and probably feels as if he has been forgotten. But she said that no one will rest until the Red Cross gets access to him and every government in the world is calling for his release.

It was an excellent afternoon arranged at very short notice by the British Israel Coalition and supported by Stand With Us.

It made a change from the previous Sunday’s terror rally at Trafalgar Square where the rhetoric called for war with Israel and signs called for Death to Israel. It’s a shame there wasn’t a similar pro-Israel rally at that time.

But with that in mind the Zionist Federation is arranging a counter-demonstration this coming Thursday from 6pm till 8pm outside the Royal Albert Hall where the Israel Philharmonic Orchestra is playing at the BBC proms.

It is in response to a Palestine Solidarity Campaign anti-Israel protest. Some sort of disruption is also expected to take place inside the Hall while the orchestra is playing.

It will be an opportunity to defiantly wave Israeli flags in the faces of all those whose sole desire in life is to see the Jewish state destroyed.

Remembering the Fogel’s whose throats were slashed by a Palestinian terrorist while in their beds.

Four simple words that could do so much for peace in the Middle East. 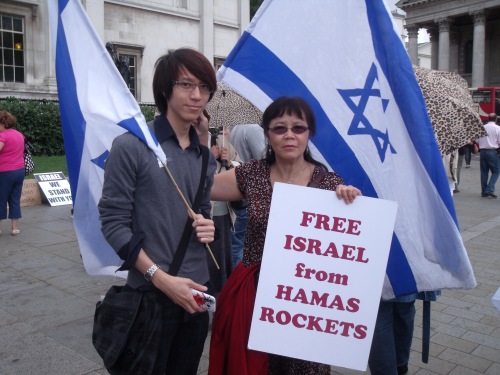 And free the Palestinians from Hamas also. 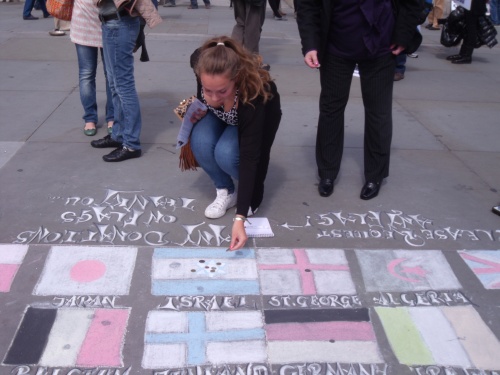 The chap in gold was seen having a cheeky cigarette five minutes later.

A good way to keep warm.

68 responses to “Israel’s supporters out in force in Trafalgar Square.”