Warhorse writer Michael Morpurgo is back. Not with a new book but to repeat the unsubstantiated allegation he made last year during his Richard Dimbleby Lecture that Israel shoots Palestinian children “like a video game”.

Morpurgo was speaking at this year’s Daily Telegraph sponsored Hay Festival and his speech was covered by Anita Singh, The Daily Telegraph’s Showbusiness editor.

Sadly, Singh wasn’t covering showbusiness but hideous propaganda that could have dangerous consequences for Jews everywhere.

Morpurgo’s speech wasn’t worth reporting as it wasn’t newsworthy; the speech was a repeat of a section of his Richard Dimbleby Lecture of February 2011!

But Anita Singh thinks Morpurgo had just returned from Gaza and that he was, therefore, giving a personal account of continuing horror there. She says:

“The War Horse author recently visited Israel and Gaza as an ambassador for Save The Children.”

But, the visit, as Morpurgo pointed out in that Richard Dimbleby Lecture, was made in November 2010. Some 19 months ago!

At Hay, as in that February 2011 lecture, Morpurgo described what allegedly happened as he was waiting to leave Gaza in November 2010:

“I heard the shots, then the screaming, saw the kids running to help their wounded friends. Now I really was outside the comfort zone of fiction. A doctor from Medecins Sans Frontieres told me that the shots were not fired by snipers from the watchtowers on the wall, as I had supposed, but that these scavengers were routinely targeted, electronically from Tel Aviv, which was over 25 kilometres away – ‘Spot and Strike’, the Israelis call it.

It was like a video game – a virtual shooting, only it wasn’t: there was blood, his trousers were soaked in it, the bullets were real. I saw the boy close to, saw his agony as the cart rushed by me.”

But there were some mysterious additions to Morpurgo’s Hay speech which seriously dent his credibility on this:

2. At Hay Morpurgo added a UNICEF quote that “that 26 children were shot like this in 2010”, which wasn’t in his Richard Dimbleby Lecture.

3. In his Richard Dimbleby Lecture Morpurgo quoted the Palestinian child death toll from Operation Cast Lead as being 300. Come Hay he has suddenly revised that figure upwards to 347!

Finally, in his Richard Dimbleby Lecture Morpurgo stated of the allegations that Israel targets children remotely “I don’t know if these claims are true”, but Anita Singh doesn’t report his inclusion of this admission at Hay.

If Morpurgo doesn’t know if such claims are true then why the hell is he going round repeating them?

How many Jewish children might now be targeted just like the three Jewish youngsters shot dead by the Islamist in Toulouse who believed the exact same propaganda now being spread by Morpurgo?

Basically, it seems that Morpurgo saw nothing of the shooting that took place as he was waiting to leave Gaza. He just believed what he was told by others.

I can’t do better than finish with this comment left by worldview21 under Anita Singh’s report:

“Morpurgo’s word that he witnessed an innocent boy shot by remote control is not believable. Where is the evidence? Who else saw it? Why did he not take any photographs? How can he assert that the bullet came from an unmanned IDF gun?

This story is the product of an anti-Zionist’s wilful imagination, maliciously designed to arouse a knee-jerk wave of hatred and indignation from a baying rabble of baiters and haters.

It has done the trick.” 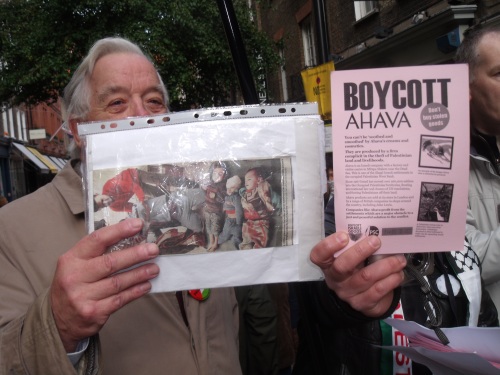 Mohamed Merah was supposed to have been shot dead at the scene of the crime last Monday in Toulouse when he killed three Jewish children and a Rabbi. If that had happened then the media and our political classes could have written it all off as the act of an extremist who probably hated French Muslim soldiers and Jews.

Monday evening’s BBC Newsnight was reporting that the gunman had a facial tattoo, as did, conveniently, one of three local French paratroopers recently dismissed for giving Nazi salutes. Then the programme heard from Pinchas Goldschmidt, President of the Conference of European Rabbis (see interview below).

Goldschmidt, himself, seemed to be under no illusions that this was the work of someone influenced by the hostile political climate in France over the way French Muslims slaughter their meat, the Minaret issue in Switzerland and the attempt to ban Halal and Kosher meat in Holland. This, Goldschmidt said, “creates an atmosphere of intolerance”.

But Merah went on living just long enough to give the real reasons for his actions outside a Jewish school, and it is the only thing out of all this that we can be grateful for. Merah said he acted to avenge the deaths of Palestinian children killed by Israel. For that he went to Ozar Hatorah school in Toulouse to specifically seek out Jews to murder.

But do the Toulouse killings really surprise those who attend anti-Israel events in the UK where the hatred of anyone who supports Israel is palpable?

No other country brings out such hatred and this can only be because of one thing: Israel is Jewish, successful and strong.

Parts of the British media, political class and British public seem so frighteningly bent on indoctrinating others against Israel and, just like those who indoctrinated Merah, their emotive weapon of choice against Israel is dead or “tortured” Palestinian children.

Many small acts of this type of indoctrination take place every day in the UK alone.

An anti-Israel activist (see photo above) used to flaunt his carefully preserved photograph of dead Palestinian children to passers-by outside the Ahava shop in Covent Garden.

There are so many more examples of these indoctrinating acts and imagine them multiplied thousands of times across Europe; each declaring loudly that Israel targets children.

Each act on its own is non-actionable in terms of incitement but together the lies contribute to a culture of hatred of Israel and Jews making it easier to explain the actions by Merah outside a Jewish school in Toulouse.

Those, whether in the UK or across Europe, who have used this form of indocrination have, in their own small way, the blood of Miriam Monsonego, Jonathan Sandler and his two young sons, Gabriel and Arieh, on their hands.

When you add to this the relentless pursuit of Israel by some British churches, the allowing of the annual Israeli Apartheid Week at our universities where Jews are compared to Nazis and the demonisation of Israel and Jews by some of our MPs it is a wonder that what happened outside a Jewish school in Toulouse hasn’t happened here yet.