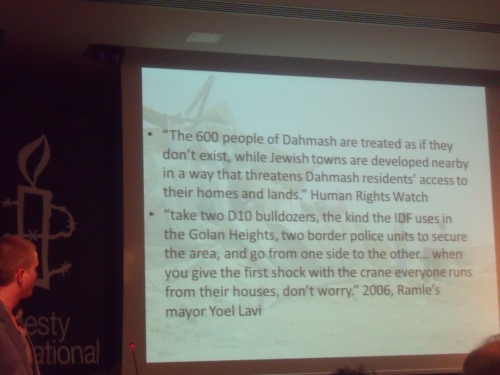 Ben White was last night handed the opportunity by Amnesty’s UK branch to call for the destruction of Israel. Not necessarily in the way Hamas would wish to achieve it, but White wants Israel changed from a Jewish state into another Muslim Arab state. This is what White thinks is “justice”.

Lest we forget, White once wrote “I do not consider myself an anti-Semite, yet I can also understand why some are.”

For that and other statements of his there was a small protest outside Amnesty last night. Once sign read “Amnesty is great, except on Israel”, which is probably about right. Amnesty will stand up against other human rights’ abuses except when they are against Israel. They raised their voice in anger when Gaddafi was cruelly tortured before being executed, but when Israeli soldiers are kidnapped or Israeli children are bombarded by Hamas rockets from Gaza Amnesty falls silent.

Amnesty’s opposition to Israel’s existence is now, sadly, almost policy. Virtually no month passes without there being an anti-Israel event and never will there be a pro-Israel voice on the platform. One of Amnesty’s roles is to try to bury Israel.

White was promoting his new book Palestinians in Israel: Segregation, Discrimination and Democracy and it will be instructive to jump straight to the end of last night’s talk.

After calling for “A future based on a genuine co-existence of equals, rather than ethno-religious supremacy and segregation”, with its obvious anti-Semitic connotation of Jewish supremacy, White said (see clip):

“Instead of asking ‘can we return?’ or ‘when will we return?’ Palestinian refugees can ask ‘what kind of return do we want to create for ourselves?’ I think that’s a kind of beautiful phrasing actually that speaks to the liberation of the imagination that has to take place as we move towards securing a peace with justice”:

I can’t see Israelis ever voting for their state being changed into a Muslim Arab state, so what White is basically promoting is more war and bloodshed.

He started with an apparent quote by Balfour in 1919 – “in Palestine we do not propose to go through the form of consulting the wishes of the present inhabitants of the country” – and ended with one by Moshe Dayan’s father, MK Shmuel Dayan, from 1950 – “Maybe (not allowing the refugees back) is not right and not moral, but if we become just and moral, I do not know where we will end up”.

White must spend many nights trolling through the internet and old books looking for quotes that support his pursuit of Israel, but it is obviously a money-making exercise judging by the queue of people waiting for him to sign their copy of his 90-page book.

In between quotes he criticised Israel for what he calls the “Judaisation” of the Galilee and the Negev and for Israel not allowing “Palestinian citizens of Israel”, as he calls them, to live in Israel with their spouses who come from the West Bank and Gaza. The serious security implications for Israel if it allowed the latter are obvious, but Israel’s security isn’t high up on the list of White’s priorities.

During the Q&A he praised the protests during the Israeli Philharmonic Orchestra’s concert at the Royal Albert Hall saying that the protests:

“Were targetting a body, the IPO, that receives funding from the Israeli state and also does concerts and stuff for Israeli soldiers.”

He raised the accusation of anti-Semitism aimed at him and said:

“The irony of the accusation of anti-Semitism against me in this context is that it is precisely opposition to all racism that informs my personal opposition to Israeli apartheid”.

And when someone asked him about Hamas and its policies White simply said that the evening wasn’t about Hamas but he hoped that the questioner would “support efforts to end the discriminatory practices against the Palestinians”.

It seems that Hamas is not much of an issue for White or Amnesty, whereas the Jewish state’s existence is.

Ben White on “Jewish and Democratic?” 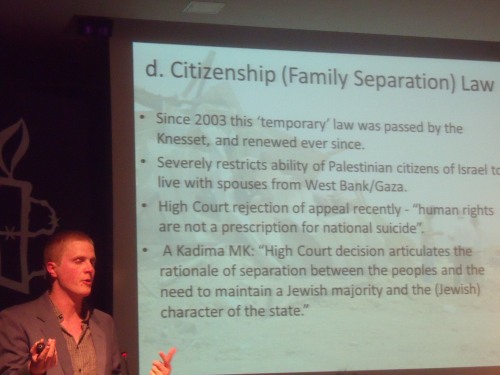 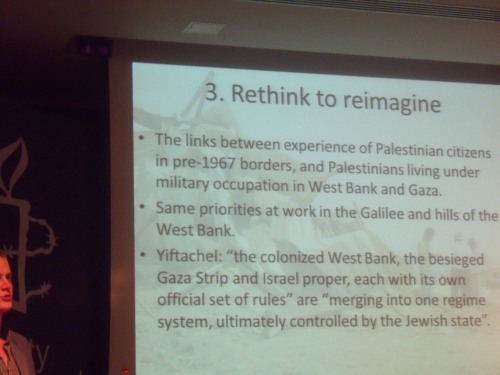 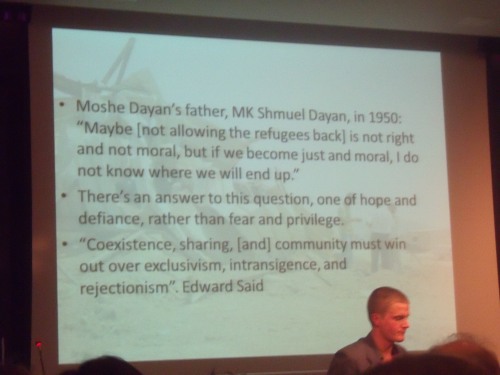 I bought this last night as no one else was buying.