Tonight really is different from all other nights. After four years of fulminating and proselytising against Israel on Talksport Radio every friday and saturday night, George Galloway’s radio show is no more.

“After a run of more than four years the highly popular radio show – The Mother of All Talkshows – has been killed off by the TalkSport management. I believe this is a business mistake, but then I don’t run the radio station and such decisions are not mine to take….It is unlikely that the TalkSport management will change their mind and re-instate the show – but you never know.” 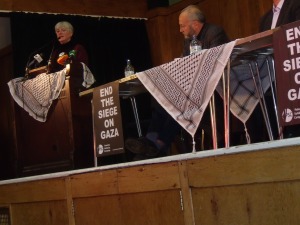 Reasoned listeners enjoy a debate but what they tend to get with George is just one-side of the argument.

(Yours truly was “banned” from the show for “deceiving the listeners”.)

Callers had to cough up 10 pence-per-minute to hang on the line while George seems to have earned over £100k a year while working at Talksport.

George is instead launching an internet radio station called Rebel Radio which will be “free speech radio, beyond Ofcom”.

The internet is the best place for George but there will be some television appearances and there is the general election to consider.

Incredibly, only some 18% of his constituents actually voted for him!

Approximately 82% of the voters he has represented over the last five years didn’t “vote George”.

Maybe this partially explains why on May 6th George will be standing in neighbouring Poplar and Limehouse instead.

Much more serious are his appearances at our universities.

At Queen Mary, University of London recently he produced this chilling rhetoric about Israel:

“I want to say to those of ill-will, should any of them be present here this evening. We will never be intimidated by you. You can send all the emails you can organise, all the synthetic fury that you like. You can complain to OFCOM, you can complain to the Charity Commission, you can even complain to the Metropolitan Police. We will never be intimidated by you. We intend to speak the truth. We will never put down the banner of truth on this issue. We will not be silenced. You cannot intimidate us. If you kill us, our sons will pick up the banner. If you kills our sons, our daughters will pick up the banner. If you kill our daughters, others will pick up the banner. This idea of the liberation of Palestine is not negotiable and it’s not stoppable. It’s an idea whose time has come and it’s going to win, be sure about that. Be sure that Palestine will be free, that the Palestinian people will return to their homes and that the gangsters running the government of what they call Israel will in the end be defeated, because the essence of their ideology is apartheid.”

He continued: “Never make the mistake of imagining that supporters of Zionism and Israel liked Jews. If you think George Bush liked Jews you never visited his golf club in Texas, where they don’t let them in, at least as members.”

I have still to understand who those of “ill-will” might be and why anyone would want to kill George or his sons or daughters.

So George is gone but not without at least some fun memories as when “Mark” called in to his show. “Mark” accused George of being an “anti-Semite” and George then demanded “Mark’s” name and address live on air so he could send him a writ for libel.

Is George really deluded enough to think someone will reveal their full name and home address on national radio?

I won’t publish the call here but you could possibly go to youtube and search for “george galloway + accusation of anti Semitism = fireworks!”

I don’t think George is anti-Semitic in the slightest but it is a fun listen!

Anyway, coming to a laptop near you soon, George Galloway at Rebel Radio.