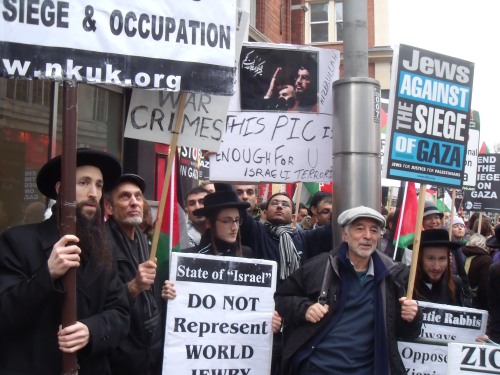 Neturei Karta pose under a photo of Hezbollah's Hassan Nasrallah in London today.

Mohammed Kozbar of the British Muslim Initiative today threatened Israel with destruction should it again take defensive action against the Hamas rockets still being fired into Israel from Gaza when he spoke on the streets of London outside the Israeli Embassy today.

The Palestine Solidarity Campaign had called the protest to mark the three year anniversary of the start of Operation Cast Lead, Israel’s defensive war against Hamas. Kozbar said:

“Our message to them is don’t repeat the same mistake again. This time will be the end of Israel, Inshallah”.

Other people spoke after Kozbar but I was told by a Constable Lines that I would be arrested for a public order offence if I continued to film close up as I was, apparently, “winding them up”. I might have been “in their faces” with my camera but then how is one supposed to film a political protest where there’s noisy traffic!

There is freedom of speech in London but no freedom to film that free speech!

Anyway, “From the River to the Sea Palestine will be Free” was a constant chant of the 300 strong mob and the Neturei Karta turned up to huge cheers and posed under a photo of Hassan Nasrallah, he of “Jews are descended from pigs and apes” and “if every Jew gathered in Israel it would be easier than going after them worldwide” fame:

Surely, the Neturei Karta must get paid by the Palestine Solidarity Campaign to be so supportive of an anti-Semite like Nasrallah.

But then, maybe, if ever Nasrallah’s Jew-killing dream comes to fruition he might spare the Neturei Karta and then claim to the world that he can’t be an anti-Semite as he let them live.

This is the Palestine Solidarity Campaign’s tactic when it employs the services of the Neturei Karta. It would be fascinating to know how much the PSC pays them.

There was a small pro-Israel turnout of about 50, which was good considering the lure of the Brent Cross sales, Limmud and Eilat, but that was enough for the anti-Israel mob to direct their aggression at. There was one huge sign opposite them which read “Israel has the right to protect itself against terror”, which didn’t go down too well.

One of the questions the pro-Israel posse kept posing to the Israel-haters was “Where’s the church in Gaza?” But answer came there none.

What I really don’t get is if you burn a poppy in the UK you will be guilty of “threatening, abusive or insulting behaviour” but it is, apparently, absolutely fine to call for Israel to be destroyed like Kozbar did today and like many signs did in Trafalgar Square in the summer.

But such incitement will be allowed to continue until a British Jew or an Israeli resident or tourist is eventually attacked and killed (G-d forbid) on the streets of the UK. 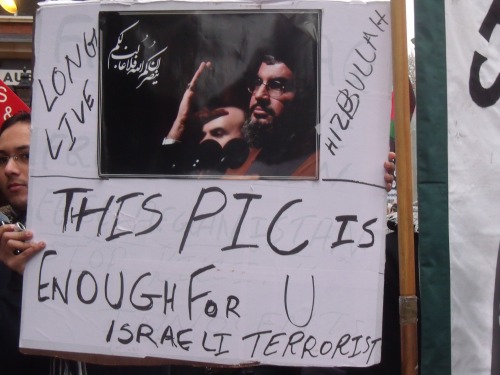 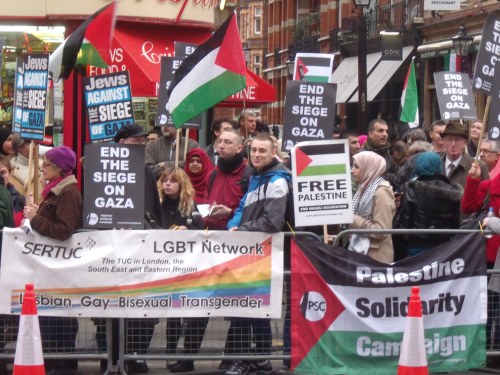 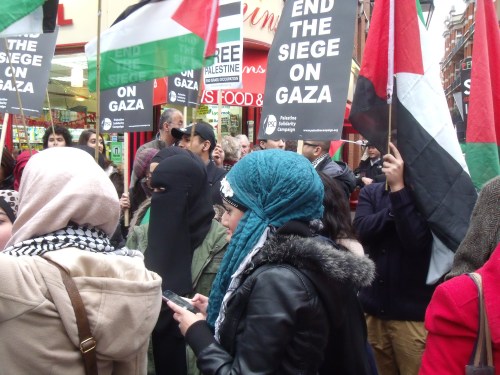 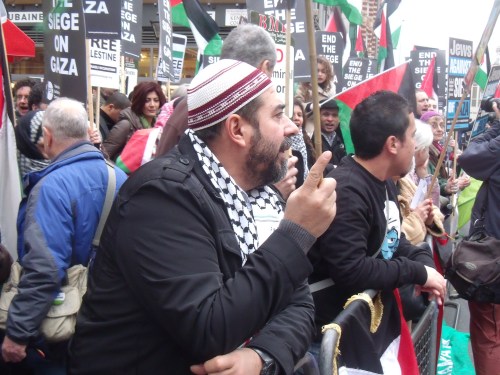 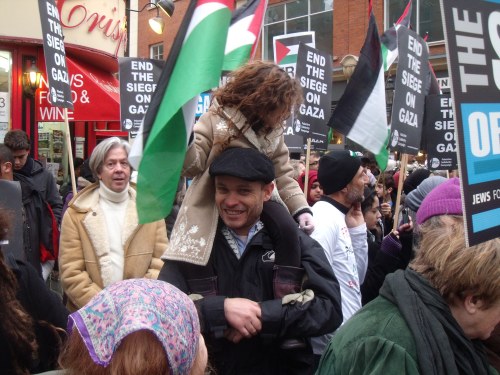 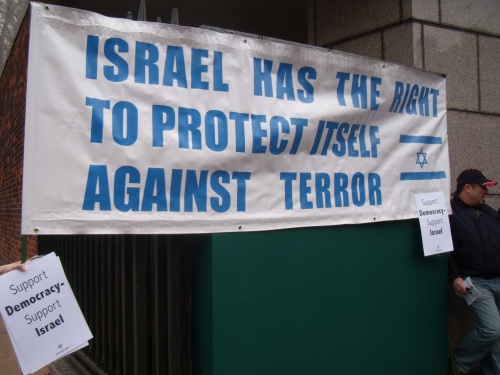 This was well-positioned directly opposite the anti-Israel protest. 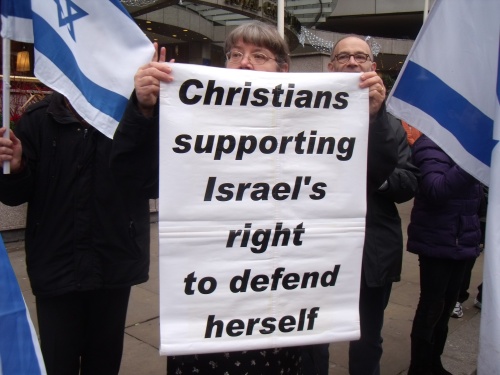 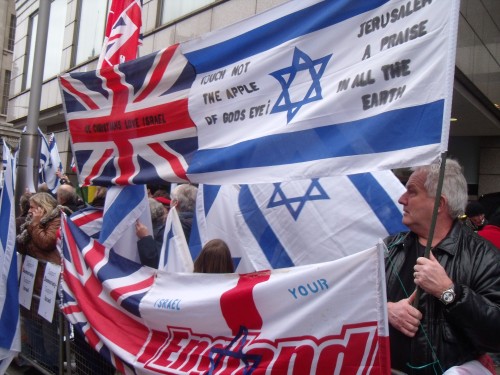 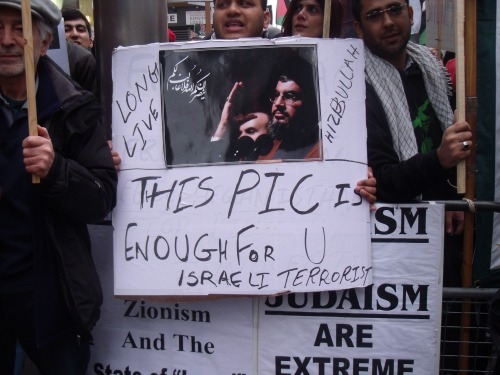 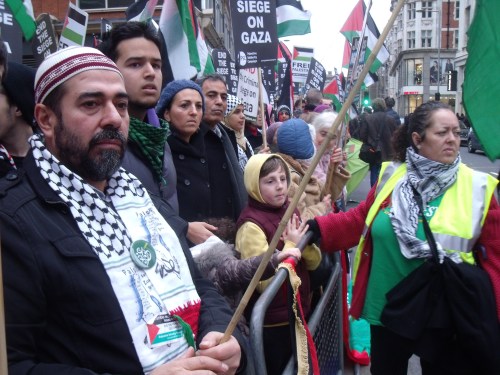 Watching the pro-Israel demo. across the road. 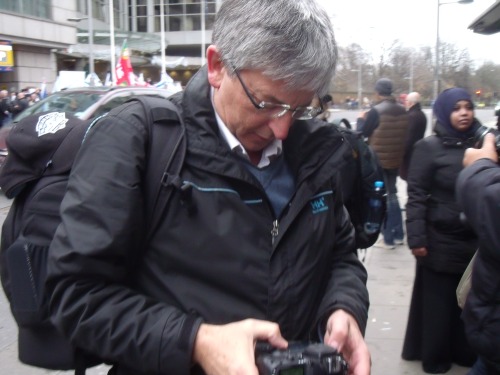 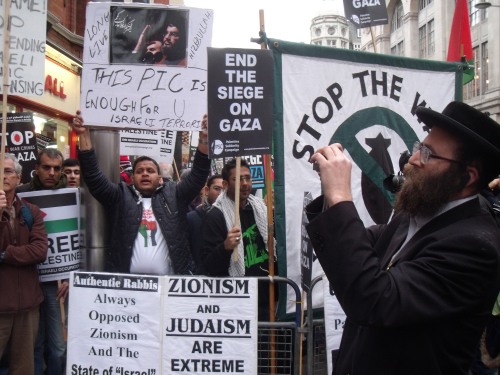