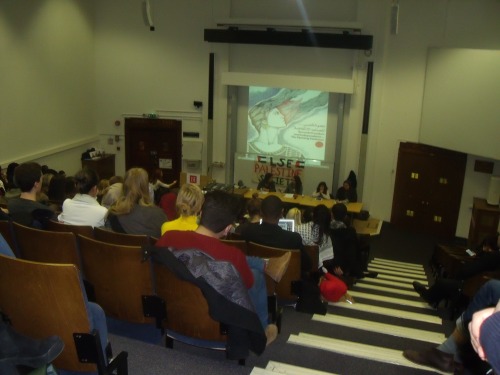 Yesterday was the 70th anniversary of the liberation of Auschwitz-Birkenau but last night at the London School of Economics at a joint Palestine Society and Feminist Society event Israelis were portrayed as rapists and those who killed Israelis were applauded.

In front of a banner that read “Towards Freedom and Independence the Uprising Continues” a panel of four women described the role Palestinian women should play in the “uprising”.

Rana B. Baker, a student at SOAS who also writes for the Electronic Intifada, said Leila Khaled‘s “hijacking of planes was amazing”. The only problem, Baker said, was that Khaled had now aligned herself with the Assad regime.

Baker reserved her highest admiration for Sana’a Mehaidli who she said “deserves a standing ovation”. She told how, in 1985 in south Lebanon, Mehaidli “drove a car full of explosives and blew it up near an Israeli convoy killing two Israeli soldiers and injuring between 10 and 12 more.”

Baker described Mehaidli  as “the first female to carry out a suicide bombing in south Lebanon” and said Mehaidli was “more admirable for not being well-known and for not being Palestinian”.

Baker concluded by saying that Mehaidli’s “will calls for men and women to armed struggle against a colonial regime based on violence”.

She quoted Mordechai Kedar’s controversial “rape as terror deterrent” statement which, she said, was “illuminating about Israeli democracy”. She also described a sign in an Israeli coastal town which, apparently, read “Pound Their Mothers” as having “sexual connotations”.

She urged the student audience not to adopt western narratives about Hamas, Hizbollah and ISIS etc. who, she said, are all referred to as “terrorists”. She complained that “calling Hamas ‘terrorists’ robs them of any agency and delegitimises them”.

Mezna Qato, a research fellow at Cambridge University, said that boycotting Israel “is a small but powerful tactic that allows women to be lifted up by the spirit of the Palestinian struggle”.

And the event was chaired by Aitemad Muhanna-Matar, a research fellow at the LSE’s Middle East Centre, who said that the Palestinians had no choice “but to sacrifice their bodies” and that “radical Jewish settlers are more a threat to Israel than the Palestinians”.

It was a truly sickening event the most frightening part of which was when Zena Agha proclaimed “We are the future leaders”.

I, for one, wouldn’t want to be living in this country should that ever come to pass.

Israel Boycotter Dr. John Chalcraft (L), a reader in the History and Politics of Empire/Imperialism in the Department of Government at the LSE v Prof. Daniel Hochhauser (R), a consultant medical oncologist.

To boycott or not to boycott?, that was the question asked last night at The London School of Economics.

Arguing for the motion, This House Believes in an Academic Boycott of Israel, was Dr. John Chalcraft, a reader in the History and Politics of Empire/Imperialism in the Department of Government at the LSE.

Opposing the motion was Prof. Daniel Hochhauser, a consultant medical oncologist specialising in the treatment of gastrointestinal cancer.

Chalcraft gave a ten minute presentation. Hochhauser responded. Both then had a few minutes to sum up. A Q&A was then followed by some final words from each before the vote which strongly went Hochhauser’s, and Israel’s, way.

Somewhat bemusingly, Chalcraft started off by arguing that he wasn’t proposing a boycott of Israeli individuals but academic institutions. Hochhauser responded that academics cannot exist without institutions.

Then Chalcroft outlined how the Israeli government funds military research at Israeli universities, which helps the Israeli Army oppress the Palestinians.

Hochhauser responded that this is usual for any country which wishes to have a military defence. The British government makes grants to British universities for the same thing and there are no proposed boycotts of Harvard, Yale or Columbia Universities considering that many more people have been killed in Afghanistan and Iraq than the rest of the Middle East.

Neither is China boycotted over Tibet, nor Turkey over the Kurds or the UK also over Iraq and Afghanistan.

Hochhauser dismissed accusations of apartheid as over 20% of the students at Haifa University, The Hebrew University and Bar Ilan University are Arab Israelis and one of the judges that convicted Moshe Katzav was an Arab Israeli. But still, incredibly, Chalcraft referred to Israel as an apartheid state.

Hochhauser was also amazed that Chalcraft is a manager of the LSE Middle East Centre which is charged with developing “research and teaching on the societies, economies, polities, and international relations of the region, which includes Arab states, Iran, Israel, Turkey, Afghanistan and Pakistan”.

All very commendable but Chalcraft’s presence destroys the centre’s credibility.

It was, however, Hochhauser’s initial statement which, for me, made the biggest impact. He explained that as an oncologist he uses treatments for cancer developed at the Weizzman Institute and how detrimental any boycott of Israel would be for his patients.

It would have been interesting if someone had asked Chalcraft during the Q&A whether he would ever refuse an Israeli-developed treatment for himself.

The audience responded in Hochhauser’s favour when the vote was taken, which was all too much for one person who, reportedly, threatened an anti-boycott member of the audience on the way out.

It is worth listening to the audio of Hochhauser’s presentation below.

Audio recordings of all the debate:

Video recordings of parts of the debate: