Posted on May 15, 2012 | Comments Off on Camera grabbed, rucksack snatched and racially abused at SOAS.

When I went to last night’s Palestine Society event at SOAS (public advertisement above) the audience was greeted with this slide when we entered the Khalili Lecture Theatre:

The slide that greeted us in the KLT at SOAS last night.

Before journalist Abdel Bari Atwan or Oxford University’s Dr. Karma Nebulsi spoke we were shown a film. Here is the eight seconds I was able to film before I felt some quite sharp prods in my shoulder while being ordered to stop filming:

Next I am told “You’re a typical Israeli, you know that”, which I took as a racist comment:

Next I am told to stop filming and recording by the chairperson before a rather large chap who had subsequently seated himself in front of me got up, turned around and tried to grab my camera, leaving me with a throbbing finger, before making off with my rucksack:

In the act of snatching the rucksack my phone, glasses case, pens and voice recorder ended up all over the floor and under the seats in front of me. I had to kneel to pick everything up, but I’m still missing a pen.

The audience started to taunt me and slow hand clap. Bari Atwan remained silent throughout while Nebulsi had the nerve to accuse me of being disruptive. Bizarrely, she offered to escort me outside to retrieve my rucksack but I refused to leave until my stuff was returned. At no stage did anyone in the 40 strong audience come to my defence in any way:

Eventually, SOAS security retrieved my rucksack and, suprisingly, my coat, which must have been removed by someone from behind me while I wasn’t looking. My coat had my keys in it:

After my coat and rucksack had been returned and after I had managed to retrieve most of my belongings from the floor and from under the seats I left.

To say I felt shaken and pretty distressed is the least of it.

I have turned off the comments just for this blog as I don’t wish to have prejudiced anything that may or may not happen but if anyone can help me with the names of any of those in the clips above then I would be very grateful.

Also, I’d be interested in knowing the translation of the Arabic on the slide above.

Comments Off on Camera grabbed, rucksack snatched and racially abused at SOAS.

Pappe, Nebulsi, Cushman: The Circus of Israel hate sweeps back into British universities. 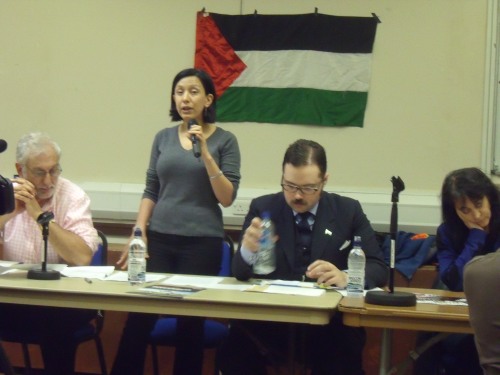 A new term and thousands of brand new students to brainwash and so it was to the University of London Union last night where Ilan Pappe, Karma Nebulsi and Mike Cushman spent two hours spreading poison and lies about Israel.

The event was called Why we need a boycott of Israel on our campuses. There must have been some 300 students in the hall at the beginning, although this had considerably thinned out by the end.

Cushman seemed particularly charged up. So much so that at the end of the two hours he siezed the microphone to hysterically shout “Free Palestine”:

But the saddest aspect of last night was the presence on the panel of a Palestinian refugee. The footage you are about to see is shocking in the extreme. If you don’t wish to see images of a scared, emaciated, poverty-stricken woman fleeing for her life please look away now. This woman shames those cowardly Syrian civilians fleeing across the border into Turkey in order to escape being machine-gunned down by Assad’s army. But brave Rafeef Ziadeh repeatedly told us that she will eventually return to Haifa. This footage is bound to turn even the staunchest Zionist anti-Israel:

Mike Cushman lectured us on the difference between an Israeli, a Zionist and a Jew. He said he was “a Jew because my mother was a Jew. I didn’t have a choice in the matter”.

For Cushman being Jewish is just about eating smoked salmon bagels.

He said if you think that a “Jewish Israeli Zionist is scarey” wait till you meet a Christian Zionist:

“They want to gather the Jews together so they can be wiped out. They don’t want to tell the Jews that.”:

Karma Nebulsi cannot get through a sentence without mentioning “the right of return”. She is so obsessed with this one aspect of the conflict one can almost imagine her in Starbucks ordering “a tall latte with an extra shot and a right of return to go”.

Finally, we had the “ethnic cleansing” maestro himself, Ilan Pappe. He said that it is important to know who benefits from “the occupation” and he called for the “racist, apartheid public in Israel to be replaced by a free state for all; those that live there and those who used to live there”.

I have a good idea who benefits from “the occupation”: Pappe doesn’t do badly for a start. The Palestine Solidarity Campaign does beautifully thank you very much. And walking in last night on every seat there was a glossy brochure produced by War on Want with the words Boycott Divestment Sanctions in red, white and green on the front cover. Amongst the chapter headings were Crisis in Palestine, Gaza: the world’s largest prison, Apartheid Walls, and Water Wars.

The Palestinian refugee industry is undoubtedly a billion pound industry out of which academics and charities have enriched themselves.

Here is Pappe on the Gilad Shalit deal saying how much more it benefits Israel as it allows the Israelis to feel that they have reclaimed a sense of morality:

When I had a chance with the microphone I explained how the BDS campaign is simply racist for targeting one country alone. Then I asked each panelist if they would ever accept Israeli medicine if they fell ill.

Cushman called it “a non-question” and said: “Would I take medicines? Of course I would. It’s not saying that knowledge doesn’t exist. It’s saying how do we use our academic resources to support or not support the continued occupation of the Palestinian people. It’s really quite simple.”

Rafeef Ziadeh could only reply: “I hope I don’t get sick anytime soon but if I keep hearing this question I might”.

Nebulsi refused to even to address the question. Pappe refused to answer it instead taking the opportunity to claim that Palestinans would be forced to spy for Israel in return for cancer treatment:

My question and the answers last night on accepting Israeli medication.

Meanwhile, Ziadeh refused to accept that BDS was racist saying they were against all forms of racism, including anti-Semitism. Apparently, stating that one isn’t racist is enough evidence in itself these days.

At least on the way out two female students, one wearing a “Free Palestine” badge, told me they had left the event early as they didn’t like the vicious rhetoric about Israel. 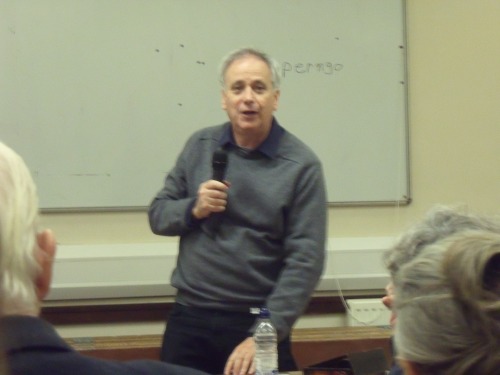 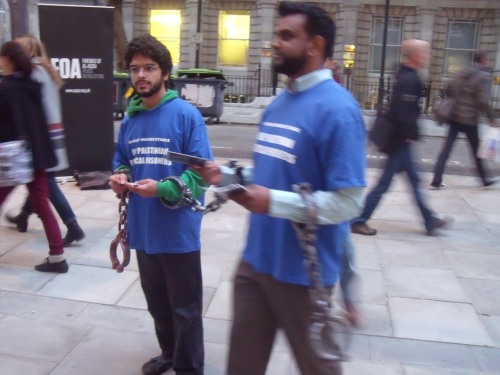