AQSA. AQSA. Read all about it! 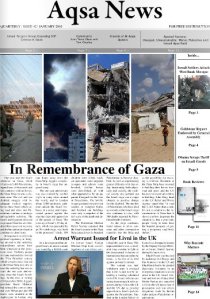 Why read the Jewish Chronicle or the Jewish News, those mere organs of the all-powerful Israel Lobby, when you can get the unvarnished truth about the Israeli-Palestinian conflict from Aqsa News? The January 2010 issue is out now.

And, to boot, Aqsa News is free (which is a huge bonus especially as the JC executives are probably, at this moment, discussing when to push the JC’s cover price up to the £1.10 mark).

Anyway, I digress. Aqsa News is 14 pages long and packed with content and devoid of annoying adverts.

There were three adverts but two were for Interpal, the subject of a Charity Commission inquiry after certain allegations were made about it in the BBC’s Panorama.  The third advert simply asks for donations to the Ummah Medical Academy in India (they need £76,500 urgently)

Aqsa News doesn’t waste its precious coverage on sport. But if you like your news slanted towards total condemnation of Israel and you want to see how its imminent destruction is coming along, then Aqsa News is the only paper to get a hold of.

To be fair Aqsa News doesn’t much like Mahmoud Abbas either (which makes you start to think where its real sympathies lie. Hamas anyone?). In his lengthy article Tom Charles states:

“The Palestinian Authority forces undermine Palestine’s democracy and prop up the quisling leadership of the unelected Mahmoud Abbas.”

There are reviews of books by Ben White (Israeli Apartheid: A Beginner’s Guide) and by Jonathan Cook (Disappearing Palestine: Israel’s Experiment in Human Despair).

There are numerous articles on the various firms and countries being targeted by pro-Palestine activists for doing business with Israel. Volvo, Brimar, Alstom and the German government are all taking a hit.

Another headline screams: “Holland to investigate Origins of Ahava Products” (the false premise is that Ahava has a laboratory on the Mitzpe Shalom settlement “and this is in contravention of the Geneva Convention which forbids an occupying Power from making use of the Occupied Territory’s natural resources.”)

There is also a Question and Answer piece on “Why Boycott matters” and a Palestinain Refugees Facts and Figures section (Did you know that “one in three refugees worldwide is a Palestinian”?)

Ahava is a funny one. Hands up if you knew that Ahava has a nice shop in Covent Garden. I didn’t until I heard that the pro-Palestine Campaign was going to protest outside it.

I went down to the shop to have a look round and to see how business was. The manageress told me business was good, even better when there is a pro-Palestinian protest outside.

However, the protests can be frightening for the staff working in the shop especially, as happened recently, protesters handcuffed themselves inside the shop while screaming abuse.

Anyway, before I knew it I was persuaded to spend £31 on a Dead Sea Liquid Salt and a Dermud sensitive skin relief.

Sadly, I spent the evening screaming my flat down when I seem to have over-applied the Liquid Salt. So, thank you to the pro-Palestine Campaign for making me £31 poorer, Ahava £31 richer and for causing me intense agony!

Back to Aqsa News. If all this stuff is getting a bit heavy and upsetting for the naive young mind (and some older minds) there is a crossword. Some testing clues for you:

9 across: Political movement with the aim of establishing a Jewish state in Palestine (7)

5 down: Israeli Jews who live in the West Bank and East Jerusalem (8)

7 down: Arabic word for Palestinian uprising against Israel (8)

There also some cartoons like that of Palestinians being arrested and assaulted by Israeli soldiers and another of a black South African woman consoling a distraught Palestinian woman in a cemetry.

Just in case you can’t get a hold of your copy of Aqsa News (it isn’t available in your local WH Smith library) then read it online or go to wwww.aqsa.org.uk. Lots of interesting facts and figures to digest there, like:

“All the land of historic Palestine is now occupied by Israel.”

The UN has re-affirmed the right of Palestinian refugees to return to their homeland over 100 times, in accordance with international law.

Apart from these two statements being highly controversial (and factually incorrect) it doesn’t sound like the author wants Israel to continue for too much longer.

Aqsa News is available from, and helping to radicalise, all good British Universities near you now!