Muslim Brotherhood’s Dr Kamal El-Helbawy defines who is a Jew, and who isn’t. 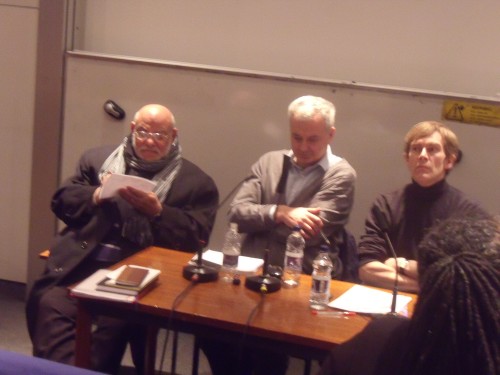 When I went to SOAS on Sunday for the Respect Party’s public meeting Where now for Egypt and the Middle East?, chaired by The Guardian’s Seumas Milne, I didn’t expect a sermon on who is, and who is not, a Jew.

Dr Kamal El-Helbawy, Chair of the Centre for the Study of Terrorism and former speaker for the Muslim Brotherhood in the West, was updating us on the political situation in Egypt as he saw it. He welcomed the fact that 75% of the new Egyptian parliament was now Islamic, but said that he hoped for increased Coptic Christian participation and the promotion of women.

The Muslim Brotherhood isn’t especially keen on Jews. For example, Hamas, the Brotherhood’s subsidiary in Gaza, remembers us in their Charter by calling for us to be killed.

However, Dr Kamal El-Helbawy seemed to be concentrating on Egypt’s pressing internal issues. Could this be a new Egypt; a Light Unto the Arab nations, I thought? Fifteen minutes into his speech and Dr Kamal El-Helbawy still hadn’t mentioned Israel and the Palestinians.

“I have Jewish friends who are really Jewish. They stay with me, they eat with me, they sleep with us at home. Who are real friends. Like Neturei Karta people. Like Dovid Weiss and hundreds of others, who are real Jews. And we respect them and we love them. We are brothers in humanity if not in religion. But unfortunately the ones we have in Israel, the Zionists, are not Jews. I am happy with what usually my dear brother George Galloway says ‘atheist Jews’. Even I say they are Zionists. They have nothing, nothing at all related to Jewish religion. Moses did not order people to kill each other and the Christ did not ask people to kill each other or colonise each other or destroy each other or stop, for example, Iran doing good research in atomic energy.”

During the Q&A I said I thought it disrespectful of him to tell us who is, and who isn’t, Jewish and that just because one might disagree with someone’s political view shouldn’t make anyone less of a Muslim, Jew or Christian for it. To applause he responded (see clip 2 below):

Meanwhile, Gorgeous George described (see clip 3) the Balfour Declaration as “142 words that have produced nearly a hundred years of misery and disaster in the Middle East” before continuing:

“Mark Sykes hated Jews. He was a vicious, foul anti-Semite, but he loved Israel and he loved the idea of Israel. Like so many he saw Zionism as a means of ensuring that he would never have to look at Jewish people on the streets of London. He talked openly about ‘we’ll be able to clean the East End of London if we can create Israel and, by one means or another, encourage or otherwise, the Jews of the East End of London to go and live in Palestine’. He hated Arabs also who he described as venal and lazy.”

Amid all this fascination with Jews Galloway, Kate Hudson, General Secretary of CND, and Andrew Murray, founder of the Stop The War Coalition, rejected all types of outside intervention in the affairs of Syria instead calling for the revolution to be allowed to take place from the ground upwards on the basis that there had never been an example of outside intervention working effectively in the Middle East and that such intervention always took place out of pure self-interest.

Clip 2: Dr Kamal El-Helbawy responds to criticism of his definition of Jews