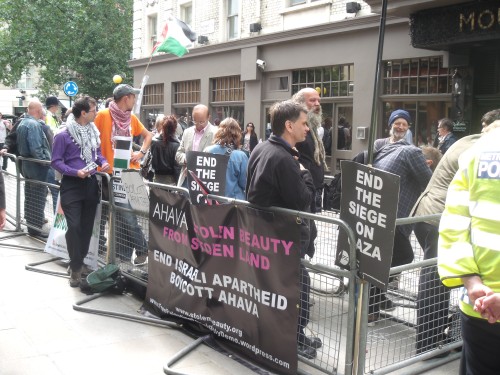 There are not many times that you can say that anti-Israel activists are outsung and outnumbered, but yesterday they were.

The usual mob of nothing-better-to-dos turned up outside Ahava in London’s Covent Garden to vent their hatred for the Jewish state.

Only one person brought along an Israeli flag. She said she came as she was worried that as it was Jewish New Year there would be no one around to stick up for Israel. Apart from her and a few others the pro-Israel pen was looking pretty sparse. 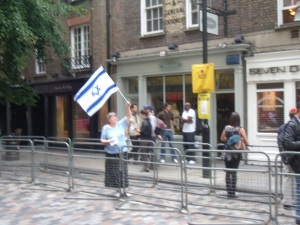 Then as the small pro-Israeli contingent were deciding where to break for lunch twelve Israeli tourists who had seen the protests outside Ahava came into the shop and then marched out again, filled the pen and sang Am Israel Chai, David Melech Yisrael, Hatikva and Hava Nagila (see first two clips below).

The anti-Israel mob became less interested in handing out their leaflets and more interesting in demonising the Israeli tourists, with some directing shouts of “racist scum” towards them (see beginning of third clip below).

The next lets-all-demonise-Israel (and anyone who supports it) event will be at midday outside Ahava on 25th September from midday.