What does David Hearst mean by “the folk”?

Hearst refused to allow me the opportunity to put a question to White during the Q&A instead preferring to announce in front of everyone there:

I sent Hearst the blog I wrote about all this. CifWatch crossposted it over at their site. Here is Hearst’s response together with my reply:

What does Hearst mean by “the folk”?

I had nothing to do with any alleged attempt. Neither did CifWatch. I don’t work for the Israeli Embassy. Hearst knows this.

Hearst hasn’t replied to my request for clarification of what he meant by “the folk”. One wouldn’t wish to come to a conclusion without his explanation.

Debate and full disclosure are to be encouraged unlike what, sadly, passes for “debate” at Amnesty.

Unless I hear from Hearst his use of “the folk” will remain a complete mystery.

(For more on this see CifWatch)

Boycotted at Ben White Amnesty event as David Hearst announces “I know who you write for”.

White and Hearst in discussion at Amnesty last night.

Last night (shabbat) I was at Amnesty International’s London HQ for the launch of Ben White’s updated Israeli Apartheid: A Beginner’s Guide. The event was chaired by David Hearst, former chief foreign leader writer of The Guardian.

After White’s talk he had a Q&A with Hearst after which members of the audience were allowed to ask White questions. Well, most of them anyway.

I had my arm raised for half hour while Hearst took questions from those sitting around me, before taking questions from the other side of the room. While my arm was still raised Hearst called an end to questions.

Feeling rather frustrated I asked whether I could put a question to White. Hearst declined my request and replied:

Sinister or what! Here’s the exchange:

So, what was I up to? Who am I? Who do I write for? Well, since starting this blog in 2009 I have mainly written for myself. I have occasionally written for the Jerusalem Post, the Jewish News, the Jewish Chronicle and CifWatch, but I never realised writing could get me boycotted.

But here’s the point; I have never had any dealings with Hearst. So, how did he know who I was?

He was obviously primed but why? I have never been disallowed from asking a question at Amnesty before, although I was once threatened at an Amnesty event by Amnesty Campaign Manager Krystian Benedict, who has since been moved to work on Syria and who was present last night.

My question to White was going to be simply this: Seeing that White relies heavily on statements by Israeli politicians to paint Israel as racist (see slides below) I wanted to know whether the same could also be said of White particularly after he once stated that (British Jewish author) Howard Jacobson’s face was “another reason to support a boycott of Habima”, the Israeli theatre company.

I’m sure White would have batted that away quite easily, wouldn’t he? He reads my blog (he mentions it), so he should feel free to leave an answer below.

White started his talk addressing the Israeli Embassy’s apparent attempt to stop last night’s event taking place and went on to dedicate the evening to “all those people, including the Palestinians, who have sacrificed so much for liberation”.

He then proceeded to talk about Israel’s continued “Judaisation”, particularly in the Negev and Galilee, and Israel’s “brutality”, “racism” and “apartheid” (including towards Israel’s own Ethiopian and Mizrahi Jews).

White loves nothing more than portraying Israel and Israelis as child killers. Apparently, Israeli soldiers hide near schools so they can kill Palestinian children (see slides below).

White finished off by telling his love struck audience that “Israel is afraid”.

Meanwhile, if last night is anything to go by I’m sure that Middle East Eye, David Hearst’s new website, will be a beacon of democracy and one of many and varied views….. 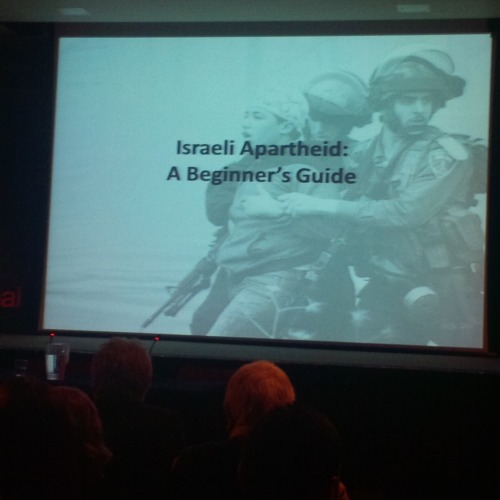 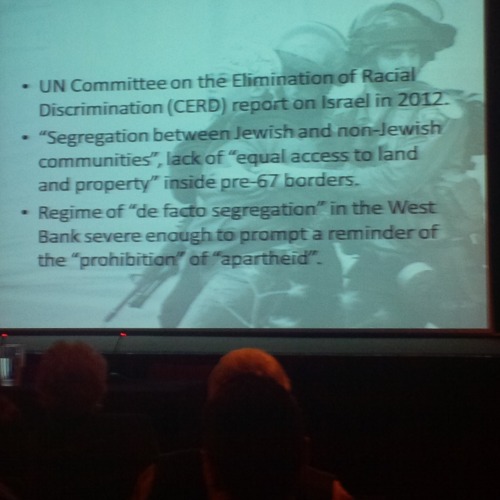 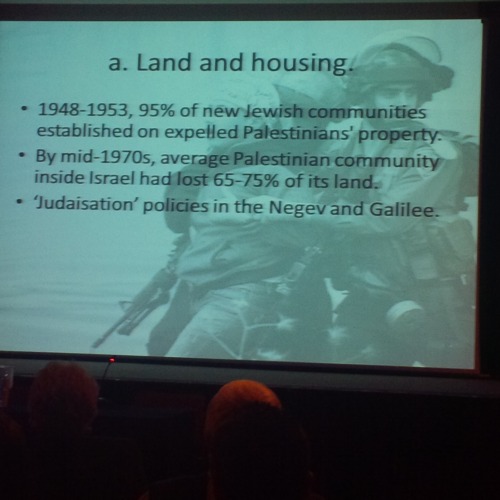 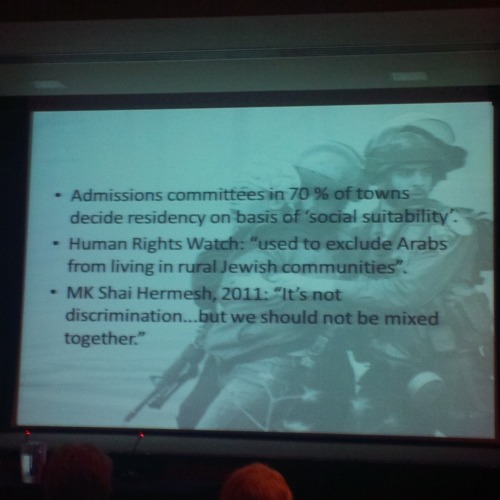 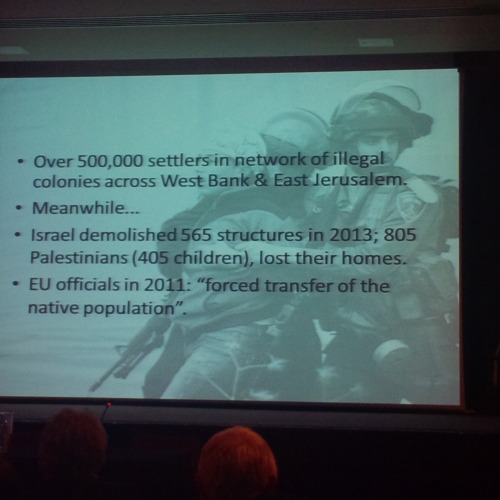