Jenny Tonge attacks Israel for not obeying the Ten Commandments. 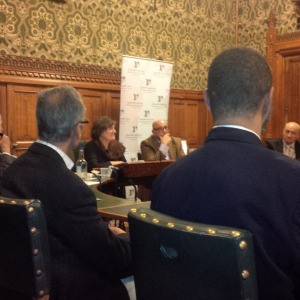 Last night in Parliament (ex-Liberal Democrat) Baroness Jenny Tonge said “If they had only obeyed their own Ten Commandments and half the stuff in the Old Testament…Israel could have been a force for good in the world” (see clip here from 8 mins. 35 secs.)

Tonge was speaking at the Palestine Return Centre event Britain, It’s Time To Apologize for the Balfour Declaration.

Also speaking was Bradford East MP David Ward who in January condemned Jews who “could within a few years of liberation from the death camps, be inflicting atrocities on Palestinians in the new State of Israel and continue to do so on a daily basis in the West Bank and Gaza”.

In July he tweeted that “the Zionists are losing the battle – how long can the apartheid State of Israel last?”. He was temporarily suspended from the Liberal Democrats.

But, last night, he claimed he had been suspended for something he didn’t say:

And last night he said “Israel are winning. We are losing hands down”. His main concern was that there is no proper plan to counteract this. But it’s certainly quite a change from his July claim “the Zionists are losing”!

Also speaking was Lord Ahmed Nazir who was jailed in 2009 for dangerous driving where another road user died. Nazir then blamed his imprisonment on a Jewish conspiracy.

Last night he claimed that “we have a great moral responsibility” and “a huge burden on our conscience” in light of the Balfour Declaration.

“East Jerusalem is being evacuated slowly, there is ethnic cleansing of Palestinian people. Whether they are Christian or they are Muslim they are being thrown out of their own country,” he continued. (see clip here)

Jenny Tonge added Israel has the right to exist but “it must start behaving properly and treat people in the Middle East the way they want to be treated”. She said Israel is a “threat to world peace and a threat to itself” and continued:

“We must take on the pro-Israel lobby. We will not be silenced. We are not anti-Semitic, we are anti-injustice. What happened to the Palestinians is the greatest injustice in the last 100 years.

They are clever. They call it the Jewish state of Israel so if you criticise the Jewish state they say you are criticising Jews and that you are anti-Semitic. But it is directed against the Israeli government, not the Jewish people. Many Jews join us.

We must boycott Israeli goods. The Israel lobby puts so much pressure on politicians. We must do the same.”

Manuel Hassassian, the Palestinian Authority’s diplomatic representative in the UK, condemned the Balfour Declaration. He said the Palestinians had been denied the right to self-determination and their basic human rights “due to the pledge by Great Britain to the Zionists”.

He said the Palestinian “right of return” was a “sacred right” and that the “non-Judaisation of the state of Israel is our red line”.

Hassassian continued by saying that Israel is acting as a “pariah state” and “let the Israelis go to hell” and that he would only negotiate with the Israelis when they had first drawn Israel’s borders for him.

He finished by saying “together we can march to Jerusalem” where there should be “no monopoly of one religion at the expense of others. Israel’s Jerusalem is a slap in the face of humanity.”

Meanwhile, if I was living in the Bradford East parliamentary constituency I would be flummoxed to see my MP David Ward spending a disproportionate amount of his time attacking Israel. Have the people of Bradford East had all their problems solved?

The 2015 general election is not too far away and Ward has a tiny majority. Maybe it’s time for the people of Bradford East to elect someone who focuses more on them.

196 responses to “Jenny Tonge attacks Israel for not obeying the Ten Commandments.”