How many Comic Relief Mosquito Nets pay for War on Want’s Rafeef Ziadah? 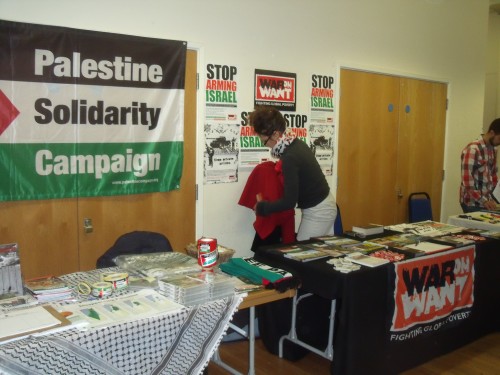 On annual Red Nose Day the BBC broadcasts an evening of entertainment interspersed with heart-breaking scenes from Africa and British hospitals and hospices all in the hope of encouraging people to donate to Comic Relief.

Red Nose Day is on March 15th but one has to wonder how much money Comic Relief wastes. It is an ongoing tragedy which I witnessed at first hand last night when War On Want appeared at the Israeli Apartheid Week event Voices from Palestine: Resisting Racism and Apartheid held at the University of London Union (ULU).

And here is War On Want’s “mock occupation of a London Waitrose” where activists singled out Israeli produce for boycotting.

So War On Want demands sanctions against Israel until Israel “complies with international law.” However, one of the demands of the BDS campaign is the return of so-called “Palestinian refugees” to Israel which, according to Haidar Eid, who spoke last night, amounts to some “seven million Palestinians”. This is thanks to the ridiculous UN definition of “Palestinian refugee”, which includes ALL the descendants of those Palestinians who, for various reasons, left Israel in 1947-1948.

A similar definition applied to myself would make me a Polish refugee (now where’s that key to my grandfather’s old home in Lodz?)

Obviously if such a “return” took place then Israel would cease to exist as it would quickly become another Muslim Arab state. Therefore, Israel can only comply with “international law”, as interpreted by War On Want, if it destroys itself. This is where Comic Relief’s money is going!

Ziadah, a Canadian “Palestinian refugee” and War On Want’s Senior Campaigns Officer (Militarism and Security), is a long-time anti-Israel activist. Here she is at an Israel Apartheid Week event last year, before she worked for War On Want, sickeningly praising Islamic Jihad terrorist Khader Adnan. Five years earlier Adnan had been filmed urging others to become suicide bombers in order to murder innocent Israelis.

At last night’s event Ziadah called for a boycott of Tesco and Sainsbury’s due to their trade with Israel. She also unveiled War On Want’s new campaign for Britain to instigate a two-way arms ban against Israel; both selling arms to Israel and buying arms from Israel, which, she claimed, are “tested on Palestinian bodies and then used in Afghanistan.”

War On Want’s Rafeef Ziadah, left, having fun with Jarar and Kopty at ULU last night.

I would like to have filmed Ziadah’s statements but we were told there was no filming or photography allowed by “unauthorised persons”. I was, therefore, limited to voice recording until early into the speeches when I felt a sudden nudge in my back from a Free Palestine T-Shirt wearing activist who suggested that I switch off my recorder or be removed.

Abir Kopty, a Palestinian activist from Nazareth who has a Masters in Political Communication from City University, London, called for a “blacklist of settlers and soldiers” who should have their passports stamped “Denied Entry” to stop them traveling.

Yafa Jarrar, another Canadian “Palestinian refugee”, gave a long, dull account of her BDS activities at Carleton University in Ottowa of which she seemed very proud.

Ziadah finished by holding up “a rock from Haifa” which, she said, was as close to home as she could get as “a Palestinian refugee”. She said she hoped that herself, Eid, Kopty and Jarrar will all one day meet on Haifa’s beach without being oppressed by the “racist state of Israel”.

So why has Comic Relief funded War On Want’s sickening racist activism to the tune of some £2m (and counting) while millions of children have died from the likes of malaria? At least one million people die each year from malaria in Africa of which 70% are children under 5. Ziadah’s War On Want salary could easily help supply thousands more insecticide-treated mosquito nets which would save lives! Plus she also seems to work at SOAS anyway.

The British people need to know that their precious donations to Comic Relief are being wasted on the racist ideologies of activists in War On Want who organise invasions of British supermarkets, call for Tesco and Sainsbury’s to be boycotted and who work for the only Jewish state to simply disappear.

55 responses to “How many Comic Relief Mosquito Nets pay for War on Want’s Rafeef Ziadah?”