Posted on May 15, 2012 | Comments Off on Camera grabbed, rucksack snatched and racially abused at SOAS.

When I went to last night’s Palestine Society event at SOAS (public advertisement above) the audience was greeted with this slide when we entered the Khalili Lecture Theatre: 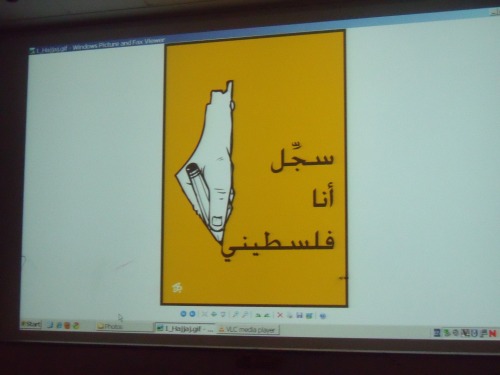 The slide that greeted us in the KLT at SOAS last night.

Before journalist Abdel Bari Atwan or Oxford University’s Dr. Karma Nebulsi spoke we were shown a film. Here is the eight seconds I was able to film before I felt some quite sharp prods in my shoulder while being ordered to stop filming:

Next I am told “You’re a typical Israeli, you know that”, which I took as a racist comment:

Next I am told to stop filming and recording by the chairperson before a rather large chap who had subsequently seated himself in front of me got up, turned around and tried to grab my camera, leaving me with a throbbing finger, before making off with my rucksack:

In the act of snatching the rucksack my phone, glasses case, pens and voice recorder ended up all over the floor and under the seats in front of me. I had to kneel to pick everything up, but I’m still missing a pen.

The audience started to taunt me and slow hand clap. Bari Atwan remained silent throughout while Nebulsi had the nerve to accuse me of being disruptive. Bizarrely, she offered to escort me outside to retrieve my rucksack but I refused to leave until my stuff was returned. At no stage did anyone in the 40 strong audience come to my defence in any way:

Eventually, SOAS security retrieved my rucksack and, suprisingly, my coat, which must have been removed by someone from behind me while I wasn’t looking. My coat had my keys in it:

After my coat and rucksack had been returned and after I had managed to retrieve most of my belongings from the floor and from under the seats I left.

To say I felt shaken and pretty distressed is the least of it.

I have turned off the comments just for this blog as I don’t wish to have prejudiced anything that may or may not happen but if anyone can help me with the names of any of those in the clips above then I would be very grateful.

Also, I’d be interested in knowing the translation of the Arabic on the slide above.

Comments Off on Camera grabbed, rucksack snatched and racially abused at SOAS.