The Siege of Ahava Continues.

The Siege of Ahava.

Considering that Ahava is due to close at the end of September, due to the relentless bullying by the Palestine Solidarity Campaign, there was no let up in the verbal attacks on Israel as about 15 activists harangued shoppers going in and out of the shop in London’s Covent Garden today.

Even PSC Chief Sarah Colborne made a rare appearance to rally her devoted followers. Maybe next time she will bring along her new best friend Sheikh Raed Salah, who has just been let out of prison on bail after having been arrested for entering Britain despite being on an exclusion list.

As soon as I arrived I, myself, was mindlessly haranged as you can see in these next two clips.

But (it gets better) in this next clip PSC activists are complaining to the police that I am filming them without authority. The clip is comedic. Off camera I was told I was a “Murdoch journalist”.

In the next clip we hear the old familiar song “From the River to the Sea, Palestine will be Free” for those who think that this is just about “the settlements”.

Even the literature handed out by the activists, which is printed by the Palestine Solidarity Campaign, reads “Don’t buy Ahava products, Israeli or Settlement Goods”.

Proof, if any were needed, that this is a racist boycott of a country, not a political one about “settlements”.

The next clip shows PSC Chief Sarah Colborne singing her little heart out and the final clip shows how loud and intimidating the anti-Israel activists are when outside Ahava.

There were three people (myself, Jonathan Hoffman and Martin) making the case for Israel but soon there will, hopefully, be news of where and when Ahava is due to re-open. Maybe all is not yet lost for Ahava. 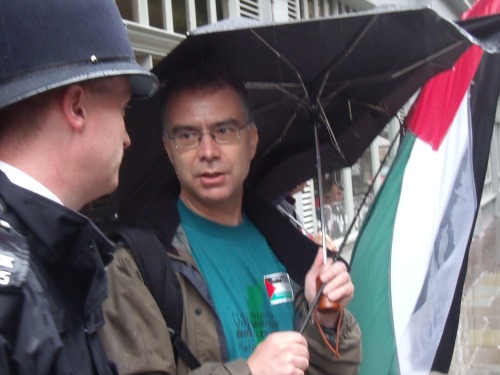 PSC activist reporting yours truly to the police for "intimidation".

84 responses to “The Siege of Ahava Continues.”