Pre-Christmas numbers down outside Ahava

Where have all the anti-Ahava protesters gone?

Not that I’m complaining but a mere 10 turned up today, which is a bit pathetic considering “Palestine is the moral issue of our time”.

It is “the moral issue of our time” until the pro-Palestinian protesters have better things to do like Christmas shopping or maybe it is the cold.

They used to number about 40-50 but the numbers have dramatically dropped off in recent times.

That isn’t to say that the cowardly protesters aren’t still trying to intimidate the all female staff that work in the shop.

There was yet another early morning paint attack on the shop front which means that the last year has been quite violent with repeated invasions by protesters, doorlocks glued up and repeated paint attacks.

Roll on 2011 and hopefully a few convictions to prove that we are not going to become a society where the rule of law is subservient to the whims of those who have an ideological hatred towards the Jewish state.

In 2010 there were no convictions and two acquittals as lawyers for anti-Israel activists on trial ran rings round the Crown Prosecution Service, with one dodgy anti-Israel judge thrown in for good measure.

Back to today and I had a very nice chat with one anti-Israel activist who was new to the protest.

We stood side-by-side handing out leaflets and she kept badgering me about who I was, what music I liked and she suggested a joint venture where we could hand out each other’s leaflets.

I tried to ignore her but she was persistent, so I asked her what other causes she got involved in.

She was against the student cuts and the Iraq war and is a feminist although when I asked what she was doing for the women who were being stoned to death in Iran she said that there was nothing she could do and asked me what I was doing about it instead.

To give her credit she was the first anti-Israel activist I have met who unequivocally denounced Hamas.

Jewish lawyer carrying self-Insulting sign "I will not complain to the police again." (isurvived.org)

On a more uplifting note Ahava seemed to be doing a decent pre-Christmas trade.

If anything, the protests and attacks on the shop have brought it publicity.

Those who never knew about the shop now go there or online to buy its skin-healing products and those who hate Israel wouldn’t shop there anyway.

Meanwhile, I continue to salute the indefatigability of the small group of loyal Ahava staff who turn up day-in day-out not knowing what they will find or who could menacingly burst in without warning. 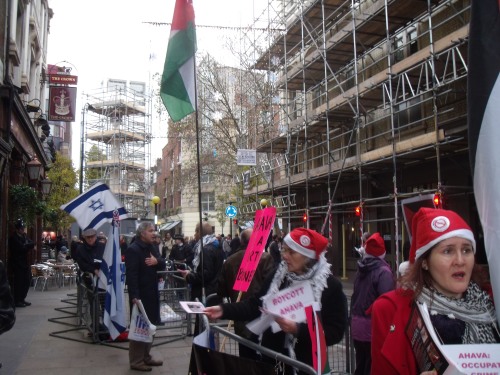