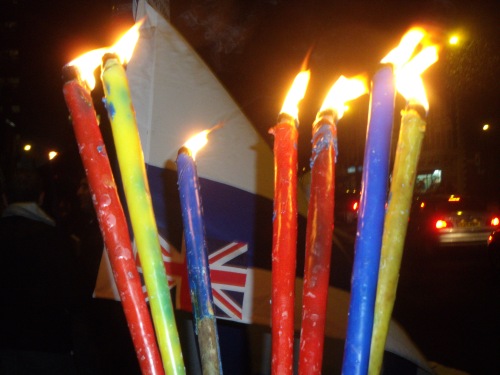 The concert consisted of classical piano compositions, Palestinian music and a couple of short plays, one called Love Amidst the War and Isiah and the other called Seven Jewish Children.

Complaints had been made to the Polish Centre about the latter play on the basis that it is anti-Semitic, which it is.

And for a Polish community centre to show an anti-Semitic play when three million Jews were murdered by the Nazis in Poland made the event doubly insulting.

In fairness the centre probably didn’t know the nature of the booking and once booked it was too late. Last night it issued a statement distancing itself from the event and racism in general.

In 10 short minutes the play portrays Jews as being transformed from being murdered into being child killers themselves.

This is the old anti-Semitic myth updated for modern day audiences and the play is performed many times throughout the year for free.

With this in mind about 15 hardy activists journeyed to west London in freezing conditions to stand outside the Polish centre.

They lit seven Chanukah candles, ate doughnuts and handed leaflets out to passers-by.

Lots of people stopped to ask what was going on and were given a full explanation of the nature of the play that was being staged by the PSC inside the centre.

The irony was that many of those who had paid the £15 to go in and watch Seven Jewish Children would probably have been outside demonstrating against it had it been staged by the BNP.

But when it comes to supporting the Palestinians anything goes, including anti-Semitic plays.

Although last night’s protest outside the Polish centre was relatively small it was effective with the Chanukah candles bringing some welcome light to a very dark evening. 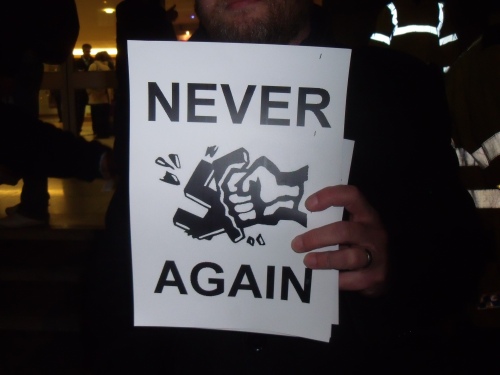 A protestor makes his feelings known outside the Polish centre. 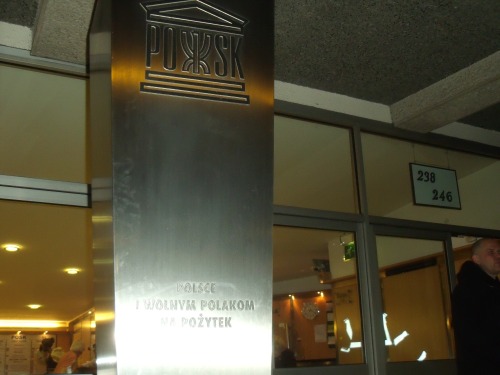 The Polish Centre where the PSC staged Seven Jewish Children.