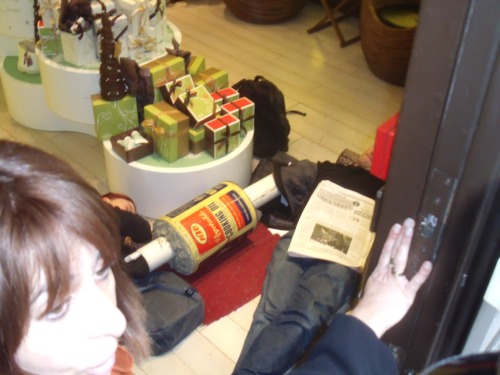 anti-Israel activists inside Ahava today shutting it down

I wasn’t intending to go to Ahava today. I went down to hear the judgment of the second Russell Tribunal on Palestine at Amnesty International in London.

As Michael Mansfield QC led the other “jury” members in to the room the whole audience rose in silence as if this was some properly constituted legal court instead of the embarrassing sham kangaroo spectacle that it was.

Mr Mansfield read out the judgment and told us that no witnesses of the companies on trial had been present over the two days of the tribunal.

Then the “jury” took questions. I asked whether Israel’s security had come into the “jury’s” deliberations at all. Mr Mansfield told me they had but that one must balance the security of Israeli civilians with human rights as a whole and he quoted the opinion of International Court of Justice which said that Israel’s “separation wall” was disproportionate to its needs. 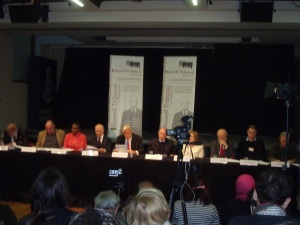 Mr Mansfield, in his summing up, concluded that one tactic that should be pursued was of popular action and that if defendants find themselves in court after entering offices or wherever then they could use the defence of “necessity” and argue that they were doing it for the greater good.

As a footnote he told us there is one such non-violent protest taking place at Ahava “now, today” and that Ahava is complicit in illegality.

So I quickly went down to Ahava and found the entrance cordoned off with police tape and a police car on the pavement outside the shop. There was a heavy police presence coming and going from the door of the shop as police took statements from shoppers who were in the shop when it was stormed by two anti-Israel activists.

The activists had locked themselves down on the floor and after being freed were eventually led away to a police van (see footage below).

There were already protesters outside Ahava when I arrived but soon many more made their way from the Russell Tribunal press conference at Amnesty and started taunting Ahava and handing out leaflets to passers-by.

Sadly, the Law Society now has its signature all over this kind of behaviour by hosting the Russell Tribunal in the first place.

As I understand it the Law Society asked for its name to be taken off the literature advertising the tribunal but the first line of today’s “judgment”, as read out by Mr Mansfield, reads:

This “judgment” will now be taken all around the world and used in unsuspecting legal systems everywhere and judges will see “The Law Society” quoted and presume this tribunal has some sort of legal standing.

The Law Society and the law have now well and truly crossed over into politics.

The great Lord Denning will be spinning in his grave. 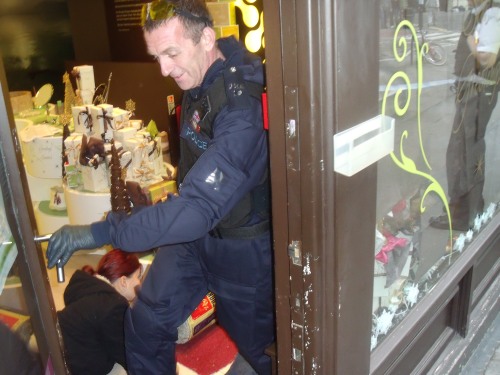 an activist on the floor of Ahava today 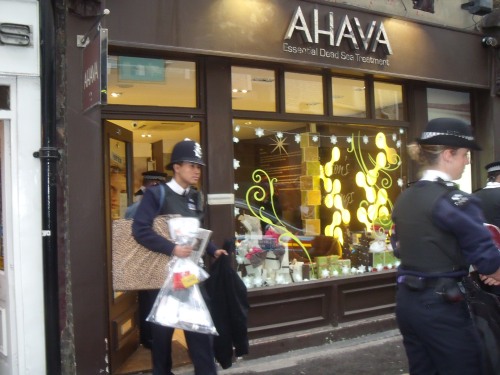 Police bringing out some of the activists' belongings today 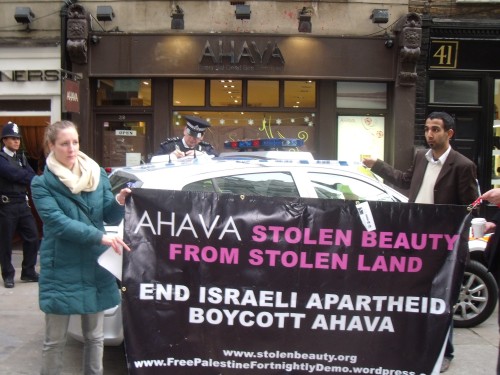 Outside Ahava today while the shop is shut

This entry was posted in Israel, UK and tagged ahava, Lord Denning, Russell Tribunal on Palestine, The Law Society. Bookmark the permalink.