There is no such thing as anti-Semitism. 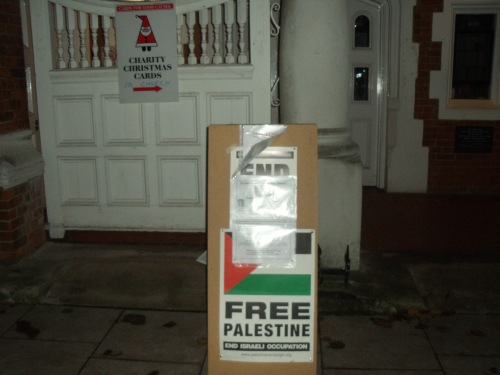 St Michael & All Angels Parish Hall, Chiswick was the quaint setting for the Palestine Solidarity Campaign’s latest event to try to tear down the only Jewish state in the world.

When I arrived I accidentally walked into the main church where there was a carol service rehearsal taking place.

In stark contrast to the hymns as I climbed the steps to the large room on top I could hear Ben White spewing out poison about Israel. 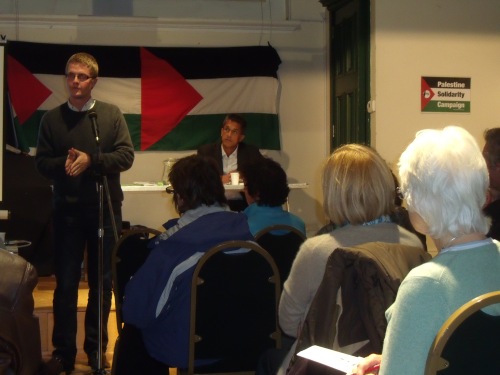 Ben White is on a mission to sell his book Israeli Apartheid, A Beginner’s Guide.

He regaled us with maps, quotes and general distortions about the history of the Israeli-Palestinian conflict while a mostly sympathetic audience shook their heads and tut tutted the whole way through.

For 45 minutes he built up a picture of Israel as a “racist apartheid” state in readiness for the book signing afterwards.

Andrew Slaughter, MP for Hammersmith and Shadow Justice Minister, was there listening in.

The chairman for the evening, a prominent anti-Israel figure outside Ahava and British supermarkets, told us that to resist is to exist.

In the Q&A White was asked whether he could extend his apartheid analogy to the treatment of the Palestinians in Arab countries where they are deprived of their rights to work, to vote and to citizenship. White remarked that they were indeed treated badly but that the real culprit is Israel who won’t implement the right of return. Once that right has been exercised there will be equality for all Palestinians.

But last night was not so much about White and Slaughter but the audience.

It is the mingling afterwards where you really get to know the nature of the beast you are dealing with.

When you explain that Israel has to do certain things to stop rockets landing in Israel and suicide bombings the standard response is “Well, Palestinian casualties are much higher”.

One man told me that anti-Semitism doesn’t exist anymore. He also said that no state has ever recognised Israel as a Jewish state and that David Ben Gurion only accepted United Nations Resolution 181, the partition resolution, when he found out that the Palestinians were going to reject it.

One woman asked me to prove I was British and twice I was asked why I still lived here.

On the way out another woman asked me, “How can you justify a fucking Jewish state?” I tried to explain the basis for nationalism but she wasn’t having it. She told me she was a lesbian and how absurd it would be for a group of gays to get together to form their own country.

And all this in a church. 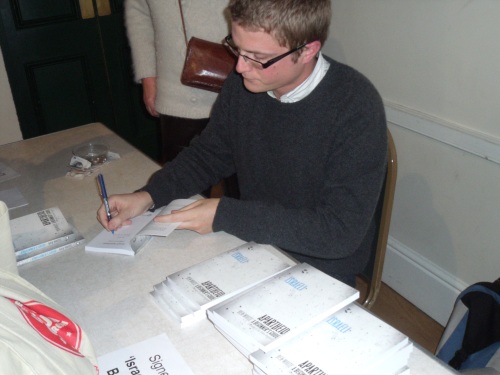