Palestine Campaign head visits her troops on the front line. 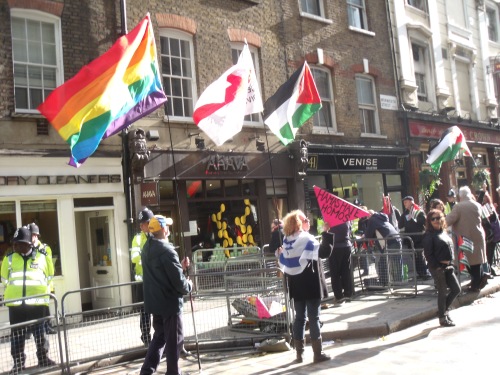 Sarah Colborne, Director of Campaigns and Operations at the Palestine Campaign, made a surprise visit to inspect her troops on the front-line on Saturday.

The Palestine Campaign sponsors the fortnightly anti-Israel demonstrations outside Ahava paying for the thousands of leaflets that are distributed to passers-by. There are obviously times when the planet need not be spared.

Anti-Israel activists were well down from the usual number. Bruce Levy, head-honcho of the troops on the ground, said everyone was at the Anarchist Bookfair.

Some did saunter along later to boost the ranks of the faithful.

This time there were just four EDL members present. As well as showing support for Israel they spent most of their time protesting against Hamas’ hatred of gays.

The day turned into the battle of the flags with the Flag of St. George and the gay rights flag hoisted in the EDL pen and Palestinian flags flying in the anti-Israel pen.

And on top of all the other celebrity boycotters even Elvis Presley came back to make an appearance in the anti-Israel pen.

As the Palestine Campaign is the chief sponsor of all these anti-Israel protests a few pro-Israel counter-demonstrators took the opportunity to make their objections known to Sarah Colborne.

She was asked whether she denounced Hamas for their call to kill Jews in their Charter (Article 7). She replied: “I will not engage with you.”

Now, I have no major problem with someone being anti-Israel, if that is their wish, but surely it isn’t too difficult to denounce an organisation that expressly wishes to kill Jews. Call me old-fashioned.

These days one has to make an expressed and clear denunciation of the EDL to prove that one is not a racist but not denouncing a proudly virulently anti-Semitic organisation like Hamas is, apparently, just fine.

If Sarah or Betty Hunter or anyone from the Palestine Campaign wishes, at any stage, to denounce Hamas after reading Article Seven of its Charter then please get in touch and I will publish any response on this blog.

…….the Islamic Resistance Movement aspires to the realisation of Allah’s promise, no matter how long that should take. The Prophet, Allah bless him and grant him salvation, has said:

“The Day of Judgement will not come about until Muslims fight the Jews (killing the Jews), when the Jew will hide behind stones and trees. The stones and trees will say O Muslims, O Abdulla, there is a Jew behind me, come and kill him. Only the Gharkad tree, would not do that because it is one of the trees of the Jews.” (related by al-Bukhari and Muslim).