Liberal Judaism and the state of “Palestein” 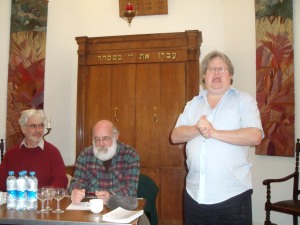 For most Jews it might seem incongruous to attack Israel from in front of the Aron Ha-Kodesh but not for Jews for Justice for Palestinians and not for some from Liberal Judaism which hosted Jeff Halper of Israeli Committee Against House Demolitions (ICAHD) at the Montagu Centre.

Halper is an American who has lived in Israel for 40 years. His talk was titled The Problems of a Peacenik in Israel: Attacking the messenger.

Before Halper spoke Rabbi Danny Rich made the following statement:

“Jews For Justice For Palestinians have booked the Montagu Centre on a number of occasions. They pay more than an economic rent. It is not our custom to censor speakers. We have come under pressure both formally and informally to cancel this meeting. It is not appropriate to cancel this meeting as JFJFP have booked our hall many times before without any problem and we do not believe that calling for a one-state solution, and I believe that Jeff does not call for that anyway, is anti-Semitic.”

So Halper does not call for a one state solution? Some of his his words:

“There’s only one government in Israel and Palestine which is an Israeli government. There’s only one army, one electrical system, one highway system and one water system. Israel has made that, now we can’t blame the Arabs for that. They accepted the two-state solution publicly in 1988. We made this a binational state and we have to accept responsibility for what we do. We made our bed and we have to lie in it, which means a one-state solution which is either binational or a democratic unitary state. I’m not advocating it. I think a one-state solution is a challenge, I think it’s just, I would like to go that way. You can’t keep advocating for a two-state solution when Israel has eliminated the two state solution.”

Extraordinarily, at the end Halper came over to me to specifically state for the record that he “supports boycott, divestment and sanctions against Israel” and he agreed that he is going round British universities both calling for those and describing Israel as an apartheid state.

As for the rest of his talk Halper:

1. Quoted General Petraeus’ recent statement on Israel’s behaviour in not allowing the West to make an accommodation with the Muslim world: “Judaizing Jerusalem isn’t some local issue. Jerusalem is the epitome of the clash of civilisations. It has tremendous implications in the world.”

2. Said the population of Israel is only 70% Jewish. 30% are not Jewish including Russian immigrants and foreign workers and their families. Adding four million Palestinians has made Israel a binational reality. Jews in the diaspora must let Israel go. What Zionism did to the Jewish people was terrible. It negated diaspora Jews.

3. Told us that if diaspora Jews respect Israel they have to respect its right to evolve as a country and find its own place in the Middle East. It isn’t in Europe. After World War One Chaim Weizzman said: “We want the Land of Israel to be as Jewish as England is English.” That made sense in 1919 in England but England could evolve and go somewhere else. England has become a very different country. Bradford has a majority non-white population. You can now become British even if you are from China.

4. Said he thinks Israel intends to keep “Judea and Samaria”: “I can’t explain why we did that if we want a Jewish state. Whoever planned these settlements must be the most anti-Zionist of them all, possibly Ariel Sharon.”

5. Stated that the majority of Jews have always lived in the diaspora and that their national identity is based on the Torah and the book of Joshua (the book of conquest) which is tribal and genocidal and which is where Zionism took its Judaism from. The prophets, however, articulated human rights and liberal humanism. The values Israel talks about are unacceptable to diaspora Jews and that Jerusalem should be Jewish is a racism people would never accept in Britain.

Halper never mentioned the spectre of Islamic Fundamentalism, twisted history by saying the Jews had rejected a two-state solution in 1948 and said that Jewish children were being “brainwashed” by the likes of Birthright Israel. This brainwashing accusation is becoming a common theme against anyone who puts forward Israel’s position.

Finally, after two-hours of advocating a one-state solution, despite his ridiculous denials, Halper even gave us its name: Palestein.

27 responses to “Liberal Judaism and the state of “Palestein””